Mafia finally arrives on a console after its critically acclaimed run on the PC. It gets thrown into the crowd of Grand Theft Autos and Getaways of the world and tries to make its face discernable. 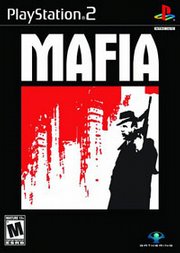 Immediately you'll notice how much of a period piece it is. Mafia is set in the 1930's, and has you, taxi driver Tommy Angelo, thrown into a critical situation in which you must help two gangsters escape attackers. You are successful and are offered protection and a future job. The game has you working your way up through the Salieri family as a learned gangster.

Like other open-ended action games, you will have a plethora of mission objectives in a huge city including deliveries of personnel and items, meetings and driving battles among other regular combat scenarios. Of course, this time it's with a 30's tinge with slow cars and tommy-guns. Cool.

What makes Mafia different is the pace and focus on character development. It's a delicate balance of action and story that would be entirely too slow if the story wasn't captivating enough. On the PC, the presentation was wonderful. On the PS2, there are disappointing load times between sections of the city map and between "levels" that really make a paced story way too slow to consume on a console. Add a lackluster shadow of how beautiful the PC version looked and the PS2 experience is not all that great.

As a matter of fact, the enemy A.I. is so toned down that it's insulting to play. The controls feel way too constricting; you'll be fighting with the analog sticks to get Tommy to get his but out of a firefight.

The music and voice acting is as good as the PC, however. I love the context-sensitive pieces. Still very well done.

In the end, though, Mafia is yet another victim of poor PC-to-console porting. May it rest in peace with Unreal 2 and Max Payne 2.