At first I thought it was shallow and kind of smarmy.

According to the weekly TV roundup of June 7, 1998, I found the women on the new HBO series "irritating" and the men "even more obnoxious." I didn't write much more than that, giving most of my column space to the week's most hotly anticipated series, Magic Johnson's new talk show.

It wasn't until the start of the second season that a colleague told me she never missed it and talked me into giving "Sex and the City" another try.

I was hooked before you could say "Manolo Blahnik." I still am.

It's not the shoes, though I know women whose dream is to wriggle their toes into Carrie Bradshaw's $300 Manolo mules or $400 Jimmy Choo sandals.

It's the fact that, beneath the glittery wrapping and the poufy bows, "Sex" has things to say about the lives of single women that you won't hear anywhere else.

That each episode opens with a woman's voice -- that of Carrie Bradshaw, a sex columnist whose subjects are based loosely on those of New York's Candace Bushnell -- is telling. So is the fact that "Sex" has employed as many female writers and directors as almost any show on the air, and far more than most.

The viewpoint, too, is distinctively female. Impossibly shapely and eternally sexy as Carrie, Samantha, Miranda and Charlotte are, they're nobody's eye candy. Their eyes are the ones through which the show sees the world. 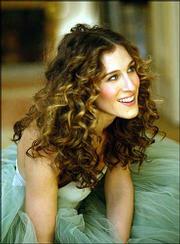 Yes, it's a world in which sex plays a large part. But where many comedies purport to be about jobs or friends or families and can't stop snickering about you-know-what, "Sex" offers truth in packaging.

And, in its unapologetically bawdy way, it tells some difficult, hilarious, too-seldom-heard truths about sex: that it can be as easy as falling off a log or as much work as hauling one up a hill; that it can be messy, embarrassing, frustrating or sublime; that when it's bad, talking about it the next day with your friends is the best revenge; that when it's good, talking about it is beside the point; that even when it's good, it's no substitute for love.

Not that sex is the only thing on the show's mind. In fact, as the seasons have gone by, the quest for the perfect sex partner -- who is also assumed to be, for everyone but the randy Samantha, the perfect husband -- has changed into something quite different.

Charlotte has married the earthy Harry, who's far from the WASP-y prince of her fantasies but who makes her utterly, inexplicably happy. Miranda has realized that the boyish Steve (David Eigenberg) is more than man enough to be a loving husband and father.

Carrie has run off to Paris with the intoxicating Aleksandr (Mikhail Baryshnikov), only to discover that her New York baggage -- her professional identity, her personal sensibility and her irreplaceable friends -- is weightier than she'd thought.

"Sex" has always celebrated women's friendships, but what's been striking in recent seasons is the way Carrie & Co. have periodically grown apart but, with visible effort, stayed together.

Seldom has a show been more honest about the ways a new baby or a burgeoning love affair can threaten relations with friends.

For a show that has sex, romance and friendship at its heart, "Sex" can also be surprisingly serious about work.

Carrie stews over deadlines, hunching over her laptop and mulling the questions that tie each episode together: Do you have to play games to date? Has monogamy become too much to expect? Are men today less threatened by a women's power, or are they just acting?

Miranda has worked as hard at being a mother as at being a lawyer. In fact, the one refreshing departure from the women's ever-glossy surface is Miranda in mom mode, her hair a mess and her sweatshirt -- a sweatshirt on "Sex"! -- stained with strained peas.

Would the show be more interesting if that glossy surface had more chips and scratches? Would it be great if Carrie and her friends resembled the rest of us more in size, shape, color and a few other ways?

Would it be a bold step if, Carrie, that hopeless romantic, were to fly home from Paris not into the arms of the repentant Mr. Big (Chris Noth) but into the insecurity and independence of the unknown?

Absolutely. But, as another hopeless romantic once said, let's not ask for the moon when we have the stars.