Reading Ed Tato's first collection of poetry is like flipping through a family album, recalling reunions, special occasions and the day-to-day idiosyncrasies of the most familiar -- sometimes most eccentric -- characters in our lives.

"True Stories from la Cosa Nostra" (Unholy Day Press, $10) tip-toes with bright, precise language through the lives of the extended Del Gabbo clan, an Italian immigrant family living in Brooklyn, N.Y. "La Cosa Nostra" translates to "this thing of ours" or "our thing" and is often used as a reference to the Mafia.

Tato explains that in his collection, the phrase takes on a more dynamic meaning.

"The parallel to the Mafia is that once you're in, you're never out. That's how your family is," he says. "No matter what you do or where you go, you're still part of the family. That might be a good thing; that might be a bad thing."

The collection begins with a fictional family tree and then introduces the family's youngest son, the very observant Pico Ripreso, in the first poem. He narrates all 13 pieces, each named for a family member. One poem layers upon the next, building a candid written history of fathers, mothers, aunts, uncles, sons and daughters.

We meet Pico's grandfather, Umberto, "a crazy old man" who buries railroad spikes in his back yard and tracks their positions in a ledger; Uncle Pico, a quiet mandolin player, who passes down family history in song lyrics and carefully labeled photo albums; and Pico's suck-up brother Zupresi, who helps with weekly shopping, clips coupons and compliments church and neighborhood ladies' shoes. 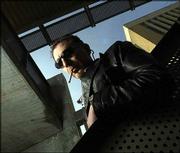 on a brilliant Sunday morning in May;

Tracy followed like cream in the wake of the spoon."

Pico's Aunt Lina has to put off romantic activities like dancing until she's well into her 30s. Her story, which seems entirely tragic at first, turns into a muted celebration of independence as a string of husbands -- who all happen to be brothers -- die successive grisly yet silly deaths, leaving Lina alone with two sons.

But "Aunt Lina bought a car at thirty-five,

when the boys left home for the army.

she drank martinis with women in fur

and flirted with men

she learned to play the harmonica."

Humor arises naturally out of the hum-drum of the Del Gabbo's lives. One of the funniest moments is the "apocalyptic licking" Pico suffers when his staunch Catholic grandmother Sophia catches him playing poker with funeral cards.

"Part of the impetus for the book is too many family poems are these grand emotional tributes to these people we live with, and there's so much more to characters than just the crusty old grandpa," Tato explains. "In this book the grandmother cooks, but she also beats the boys with everything at hand. It's a complex dynamic."

Tato's day job is selling real estate for Reece & Nichols. He's also president of the East Lawrence Neighborhood Assn. He does most of his writing at home, but he can often be found hanging out at the Bourgeois Pig or the Replay Lounge.

The poems in "True Stories" deviate a bit from his typical style, he says, reading almost like super-short narrative stories instead of poems. Other examples of his work push the narrative to the background and reveal it in small increments, discrete moments that don't necessarily tie together in clear ways.

"I was hoping that it ('True Stories') would appeal to people who would never pick up a book of poems," he says. "But I think they really are poems. I think making them longer would lose a whole lot."

Although Tato grew up in Buffalo, N.Y., he says the Del Gabbos don't reflect his own Italian family history.

"Some of the incidents have occurred, I guess," he says. "The point was to try to make the dynamics and the relationships true, not necessarily the incidents that occur."

Each poem stands alone as a character study, but taken as a whole, the collection has the magnetic effect of luring the reader back to its pages to tie together the strange, funny, tender strands that bind this family together.