Los Angeles — Johnny Depp was a surprise lead actor winner Sunday at the Screen Actors Guild Awards for "Pirates of the Caribbean: The Curse of the Black Pearl," while Charlize Theron took the best-actress honor for the serial-killer drama "Monster."

Depp, who did not attend the awards, won for his role as a jittery buccaneer in the summer blockbuster, beating out Sean Penn, who had been considered the favorite for "Mystic River."

Theron won for her portrayal of executed murderer Aileen Wuornos, a role for which the actress gained 30 pounds and obscured her cover-girl beauty behind false teeth, dark contact lenses and a splotchy complexion.

"I'm so honored and proud to be an actor, 'cause God knows, I don't know what else to do," said Theron, a native of South Africa. She thanked her cast mates and director, Lawrence native Patty Jenkins, along with "my angel and my date tonight, my mom, who put me on the plane with a one-way ticket to Hollywood when I was 19 years old. Thank you for being so brave and letting me go to make my dreams come true."

The ensemble acting award, the guild's equivalent of a best-picture prize, went to "The Lord of the Rings: The Return of the King," the front-runner to win the top honor at next Sunday's Academy Awards.

The SAG wins boost the individual actors' Oscar prospects. Theron, Robbins and Zellweger have been viewed as front-runners through awards season, and guild honors provide one last push among Oscar voters, who must cast their ballots by the end of the day Tuesday.

Among the guild's TV awards, "Sex and the City" won for comedy-acting ensemble on the same night the series ended its six-year run.

Other comedy TV honors went to Megan Mullally for "Will & Grace" and Tony Shalhoub for "Monk." 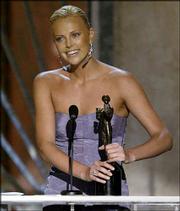 Actress Charlize Theron accepts her award for best leading actress in a motion picture for her work in "Monster" at the Screen Actors Guild Awards on Sunday in Los Angeles.

"Angels in America" earned Meryl Streep and Al Pacino the acting awards for a TV movie or miniseries.

Guild nominees were chosen by 4,200 randomly selected union members. The full membership of 98,000 was eligible to vote for winners.

The guild presented its lifetime achievement award to 91-year-old Karl Malden, an Academy Award winner as supporting actor for "A Streetcar Named Desire."