"The Passion of the Christ" plays like a blend of a political-theology lesson and a snuff film.

Mel Gibson's latest effort -- surely the year's most controversial piece of cinema -- takes great pains to be historically accurate in its depiction of Christ's final days and crucifixion. It also takes great pains to show great pain. The final hour results in one of the most unpleasant moviegoing experiences ever at a neighborhood multiplex.

If there were more attention paid to the divine message, the film might be easier to appreciate. This graphic approach works on a visceral level, but there are not enough intellectual or spiritual ideas to counterbalance it. Gibson seems far more concerned with the physical specifics of the torture.

What's so disquieting about this aspect is that Gibson has shown a predilection for that kind of theme throughout his career. His Oscar-winning "Braveheart" went into extensive detail to depict the scourging and dismemberment of Scottish legend William Wallace. (Interestingly, there is a shot in "Passion" that recreates the moment where Wallace sees his dead wife walk among the jeering crowd during his final ordeal. Only here, it is Satan who makes the stroll.)

Passion of The Christ **

Mel Gibson's controversial effort about Christ's final days and crucifixion plays like a blend of a political-theology lesson and a snuff film. While the filmmaker obviously invests a lot of conviction into recreating the authenticity of the era, his spiritual message is obscured by an unrelenting torrent of bloodshed.

Also consider the sheer amount of roles Gibson has taken as an actor where he suffers through heaps of excruciating abuse -- "Payback," "The Road Warrior" and "Lethal Weapon" come to mind. Maybe it's unfair to psychoanalyze the actor-director through his work, but this guy sure seems to have a serious masochistic/martyr complex.

(If Gibson decides to make his next film about Rasputin or that Utah hiker who had to cut off his arm after it got trapped under a boulder, it might be time for him to seek professional help.)

It's a shame, because Gibson's latest film bristles with conviction. From the fact that it is rendered in the Aramaic, Latin and Hebrew tongues of the era to the sheer persuasive nature of the visuals, "Passion" avoids the hokey trappings of the Cecil B. DeMille-type versions of the Bible.

Although the film was shot in Italy, it effectively resurrects Jerusalem of 2,000 years ago. The buildings appear lived in; the inhabitants feel authentic.

For example, just look at the way the Romans are portrayed. They are not the faceless military drones of "Ben Hur." Save for a few cackling drunkards, these men are depicted as being just the right combination of bored, indignant and paranoid that goes along with those in a smaller force trying to occupy a hostile country a thousand miles from home. Particularly believable is Pilate (Hristo Shopov) who accurately conveys the demeanor of a defensive bureaucrat struggling to defuse a volatile situation at any cost.

The movie's most interesting moments occur during its first act, which begins with Jesus (Jim Caviezel) being betrayed by Judas (Luca Lionello) for 30 pieces of silver. There is an ominous sense of foreboding during these night-time scenes, punctuated by a disquieting encounter with an androgynous Satan (Rosalinda Celentano).

Soon the conflict becomes more about the machinations of how the Pharisees and the Romans interact, and how Jesus' impact as a "blasphemer" disrupts the whole system.

Gibson and screenwriter Benedict Fitzgerald choose to depict Jesus in a unique way during these tribulations. Unlike, say, "The Greatest Story Every Told," where the central figure is shown to be dispensing tidbits of wisdom with beatific grace, Caviezel's Jesus is largely silent. Once the events are put into play, he does little to halt the process. His power stems from being resigned to endure whatever is thrown at him.

Much has been debated about whether the film is anti-Semitic. Viewers can seek their own interpretation about that lingering question. However, one group of people is inarguably disparaged. Gibson constantly uses physical abnormalities to signify evil. Several times dwarves are shown as representing demons. At one point, Satan carries what appears to be a baby, but turns out to be a hairy midget. What exactly does that represent? 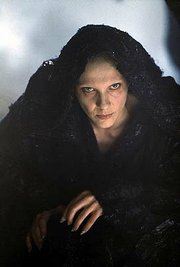 The portrayal is truly unflattering, yet I haven't seen Peter Dinklage or the cast of "The Littlest Groom" standing in any picket lines.

"The Passion of Christ" is shaping up to be a film that is divisive by its very nature. Some will appreciate it for trying to take an un-Hollywood approach to a historical subject. Others will applaud Gibson for investing so much of himself into a project that reflects his faith. Some will despise the movie simply by nature of it being made.

The majority of people will likely form opinions without having watched a single reel.

But for me personally -- and I'm a film critic not a Biblical scholar -- the relentless brutality of "The Passion of the Christ" overshadows its message. I would like to have seen less torture and more character study, more history, more moral debates ... more religion.