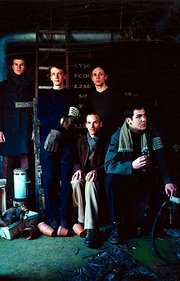 Since England is the last nation that still supports our oil hungry meddling, you should consider it your civic duty to embrace and celebrate British Sea Power. Although their grasp of United States Geography is tenuous at best (they kept asking how close Lawrence is to Kansas), these single-named chaps are riding the waves on a worldwide hype battleship. HMV Records called them the 17th Best Band in the World, and Time Out London Magazine says they're the Best Live Band. Ever? In London? We don't know, but listening to them is a personal freedom that you should enjoy before it goes the way of the right to privacy. Lawrence.com spoke with Hamilton at 11am Central Standard Time/5pm Greenwich Mean Time, about shrubbery, the Bay City Rollers, and those damned French.

lawrence.com: Your new record, "The Decline of British Sea Power" is receiving universal praise. I'm looking at the HMV Records "Poll of Polls 2003," which named you the "17th Best Band Ever to Walk the Planet" or something (17th Best Band of the Year, actually). Is that right?

British Sea Power: Pretty much so. Perhaps not quite.

Outkast was voted No. 1 in that poll. Can you explain the popularity of Outkast. 'Cause I don't get it.

I quite like Outkast actually. Particularly I like one record on their album of the two, The Love Below, quite a bit.

That's the one B.B. King likes too.

That kind of makes sense. I guess it's a bit more "B.B. King" than the other one.

British Sea Power's live presentation is becoming the stuff of legend with the shrubbery and taxidermy so forth. Do you worry about wildfires breaking out onstage?

Yeah. Perhaps a nice bushfire could only add to the proceedings; keep you warm if it was on a cold night. We carefully select nothing too dry and tinder-like. I guess we have to watch ourselves in America. What was the name of that heavy metal band who had the terrible problem with the fireworks?

Great White, who were more white than great.

Yeah. We've sort of wondered how long we'd have the trees onstage now, and maybe there will come a day when we have something else. It was something that we just started doing at a place in Brighton. It's obviously incredibly cheap and easy to carefully prune a few branches on the way to a show. It just looks, and sometimes smells, quite nice. People seem to like it.

That'll be welcome at the Bottleneck.

Are there many trees around Kansas? I've never been to the midwest of America before.

There are many trees.

So we'll be all right.

But British people aren't allowed to cut them down, I'm afraid.

We'll have to bring them across the state border, then.

Or find a Texan to cut them down for you. We'll let Texans do anything in this country. So you live in Brighton. There's a Stray Cats song that states, "There ain't a goddamn thing that the cops can do, there's a rumble in Brighton tonight." Is this sort of disregard for law enforcement typical of the U.K. citizenry?

Well, the Stray Cats would know. You can take their word as gospel. Brighton. It's not a rough town in general. It's known for being quite mellow and slightly bohemian perhaps.

And loaded with retirees, I'm told.

... The English always like to go to the sea at the end of the day, which is, of course, what we've done, prematurely, getting in there early. We've got our lawn chairs set up already.

Besides the accents and lederhosen, how do European audiences differ from audiences in the U.S.?

To be honest I wouldn't say there's a vast difference. Fan audiences have quite take to things most places. People who don't like us, I think, are the French, which is maybe understandable because they're not keen on British things, or indeed, American things, in general at the moment. So we haven't done fantastically well in France to date. But next year it's the anniversary of the Battle of the Trafalgar, Nelson's great victory over the French Navy in 1805, so we might have to impose our will on the country if they aren't going to take to us by other means. But audiences in America have always been good, and across Europe they've been pretty good. The only time we've toured Europe with any depth at all is when we did about five weeks there with Interpol. That was generally pretty good.

think our two countries have to stick together at this point. On a scale of one to, say, 14, how odd are you guys?

I'd say, well, not particularly odd on a scale of the way bands should probably behave, really. The idea that we're eccentric-we don't mind that. We don't think of ourselves as eccentric. We don't walk around wearing frock coats in day to day life or anything. It just seems if you make a little effort it goes a long way and people think it's-even in the year 2004, the idea of putting a few trees onstage, or branches-people take it to be a great avant-garde gesture. ... It's just making a slight effort, really. One thing, the owls are just plastic decoy owls, which makes it kind of even less remarkable, but they look quite imposing onstage. We like having a-we've just got an owl and a peregrine falcon is what we generally have, which is kind of the king of birds, really.

So no former pets or band members propped up onstage with you?

No, but it's one for the future, perhaps. Our guitarist has-not wishing to tempt fate-our guitarist has got a dog called Wesley. It's just a terrier which is getting on a bit. So perhaps-It's got to come to us all-so perhaps Wesley can serve after his sad demise, but we hope that's years off yet.

I'm waging a one man war against the term indie-rock, since so-called indie-rock bands simply do not, and cannot, rock.

We're not ones to take great offense if we're called indie-rock. Although it's a kind of nebulous and underwhelming thing to be called. We realize that we must have utility in this world, and for your average dear old lady navigating Wal-mart perhaps-if she were to know we were indie-rock, we'd kind of feel flattered that she knew that much about us. But it's a bit of a mealy-mouthed term, isn't it? It's not the sort of thing you can run to the ramparts, saying, "We are the paragons of indie-rock."

We'll try and do similar. We like to think that we can be reasonably forceful.

Your drummer-Is his name Wood or Woody?

He's called Wood, which is his surname, but he's generally known as Woody.

Is he the same guy that was in the Bay City Rollers?

Which one was Woody? The blonde one?

No, that was Derek.

Woody was the very very small one. But he's not in your band? It's not the same guy?

Well, he's kept it quiet. They're all child molesters, aren't they, the Bay City Rollers? They're always in the news over here. Various members are being investigated for, you know, "bad things."

Yeah. But Woody's a good name for a drummer. It's quite literal-minded. It's what he holds in his hands.

I've heard his drumming style is indeed sort of wooden, except for his arms.

Right. He has a very sort of fixed posture. He's kind of slightly distracting, in a good way, the way he's very intent.

Some of us more than the others. In Britain, you're never far from the sea. It's a difficult thing to avoid, really.

So when the Labor Party had battleships in Bournemouth Harbor, were you tempted to set up and play a show there?

Were they real battleships or was it the game?

I think it was actual ships.

Oh, now I'm with you. Not strictly battleships, perhaps-a smaller craft of some kind. A destroyer, perhaps. ... The battleship's a bit bigger. That rings a bell. Security measures, in the case of some sort of suicide rowing boat forcing its way in.

They seem to take their naval responsibilities more seriously in Bournemouth than Brighton. Any thoughts of relocation?

There's no dockyard or anything in Brighton. It's very much pleasure crafts and weekend sailors, no proper seadogs around there really. We have been approached by the National Maritime Museum in Greenwich, which we found quite pleasing. ... They're having a big thing, which is "Year of the Sea," which is sort of the 200 years since the Battle of Trafalgar, basically. We've been approached to be the musical element of this celebration, which will obviously endear us to the French even more.

Your music seems wildly inappropriate for such an occasion.

They were talking about attracting a younger audience. The National Maritime Museum is not that frosty. They've got a lot of artwork there. Some of it's been done recently. It's not all old portraits and things. ... They're talking about letting us do a brief tour by ship around the coastline, stopping off to do a concert then getting back on the craft to go to the next town.

Let's hope it's not just a barge. Maybe it'll have a roof. That would be good. And electric power.

That way we don't have to row.