Review: James Bond: Everything or Nothing - PS2, Xbox, Gamecube

Everything or Nothing sets a new standard in video game production values. The voices and likeness of Pierce Brosnan as James Bond, Dame Judi Dench as M, John Cleese as Q and Heidi Klum, Shannon Elizabeth, Mya and Willem DaFoe appear. Sounds like a movie cast, eh? Even Bruce Feirstein, Bond scriptwriter, wrote this original story. So how did the final game fare? 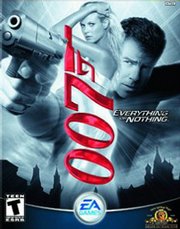 EA attempted to closely knit story and gameplay together to fully immerse you in the role of James Bond. Gone is the first-person perspective and in is the third-person view. This switch makes the stealth and gadget aspects more believable and is a welcomed addition to the franchise. You can crouch, dive, get your back against a wall, peek and use "Bond sense" to freeze time to find the nearest enemy, rappel up to and off of ledges, drive Bond-ish vehicles, fly helicopters, use bombs disguised as coins and use remote decoys to get into hard to reach areas. The stealth and action elements are truly robust.

Most of your 20+ brief missions have you in that third person perspective. In order to aim, you must lock on to your targets. Once locked on, you can use the right analog stick to move an aiming reticule for pinpoint shots in the foot, arm, head, etc. You can even aim as you take cover behind a crate or wall, press the fire button to peek out, shoot, then automatically return to cover. This is pretty reminiscent of kill.switch, but feels noticeably clunkier. That fact that you must lock on to aim can be severely limiting. When there are five enemies in close proximity, you can't manually dispatch them without cycling through your lock-on options which takes precious time. In turn, you revert to the game-halting "Bond sense" out of necessity rather than novelty. There is no reason the next iteration of Bond couldn't mix the lock on feature with totally free manual aiming.

The stealth aspects are better. You have two attack buttons for punches, kicks and throws. If you're good enough to sneak up right behind someone, you can snap their neck to leave them neither shaken nor stirred.

The driving levels feel open-ended and more often than not give you several ways to get to your objective. There is a highway motorcycle chase and a dirt road train chase in a car that give a particularly overwhelming sense of peril and speed. These times are the most enjoyable throughout the game.

The helicopter, tank, skydiving and a few other car levels do not seem as polished. As you drive in the car, certain terrain will slow you down way more than it should, which can be severely annoying when three enemies are closing in on you. Moving from side to side in the skydiving parts doesn't feel right, especially when you hit objects you look like you're clear of. The tank level is a glorified Duck Hunt since there is a set path your driver takes while you use two weapons to dispatch the random enemies. It's not too exciting.

In every level there are a certain amount of "Bond moments" for you to trigger by finding an alternate route by crashing through construction, using environmental objects to kill enemies and by other non-obvious means. These are all fun and rewarding.

Once you know what you're doing, most of the missions don't last long. Sometimes, it seems as if you're spending more time watching the story progress and saving/overwriting your file between missions than actually playing them. I tried to convince myself that it was forgivable since the whole production was very cinematic in nature, but I couldn't abide by that notion in the end.

What Everything or Nothing does particularly well, though, is make you believe you're Bond. And that is something that not even the heralded Goldeneye could do. Kudos to EA for the production.

The multiplayer modes are pretty decent. You and a friend can go through different types of missions together. You must truly work as a team to achieve particular objectives, And although it doesn't seem to have been given the attention that the single player campaign did, it is most definitely worth a once-through. The "Arena" Deathmatch mode has maps that can only be unlocked by playing through co-op mode. Unfortunately the set-up doesn't work very well and won't pull you away from your current multiplayer favorite.

The graphics are wonderful, for the most part. The character models are some of the best replicas I've ever seen in a video game. The cars look shiny and reflect like they should. The particles fly from the bullet hits. The textures aren't overly-used. Character animations aren't too impressive, but get the job done. The sound is superior. The voice acting is phenomenal...as it should be with real actors. The sound effects and surround are Hollywood caliber. Top notch.

I like Everything or Nothing. I think EA was smart to get out of the first-person flood with this franchise. I am excited to see what happens with the next iteration, though. I want levels that are more seamless, inverted flight control for the love of God, aiming that doesn't limit the player and a more robust multiplayer experience. What is here is a great start. I just hope that the attention to presentation can be duplicated the next time around.