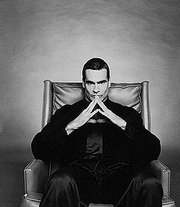 Henry Rollins has a lot to be mad about. The legendary Black Flag front man-turned-standup comedian/motivational speaker has seen what's going on in the world, and isn't happy. At all. And how could he be? While our president sends men and women to their deaths so CEOs can fuel their Escalades more cheaply, America can't stop talking about the "vision" of a homophobic Aussie publicity whore. Henry spoke to lawrence.com about America, Levi's, shock, awe, jobs, poverty, innocence, greed, Grammies, Hank III, cold cuts, video games, Sony, Kirk Douglas, tattoos, Gene Simmons, William S. Burroughs, and, of course, Lawrence.

lawrence.com: What's pissing you off more than anything right now?

Henry Rollins: The state of our union. The state of my much-loved America. Outsourcing of jobs. All the deregulation, that I think leads to no good. Our president's beliefs that business will police itself. There's good arguments on both sides. I'm one of the ones that don't think that big business will police itself, and we'll be looking at a lot of toxic waste. And especially this hemorrhaging of jobs, all the outsourcing of employment in the middle of an employment crunch. It makes me mad. When you see grown men without work, protesting, you're like, "Wow. This guy wants to work. His country's failing him." Meanwhile, Levi's jeans are no longer made in America. That kind of stuff. It just makes me mad. I have a job. I'm lucky. But if I didn't I don't know what the hell I'd do. I'd be mad and scared.

You're currently on the "Shock and Awe My Ass" tour. And you've toured military bases, right?

I'm going on another one in April.

I'm surprised that they'll let you on the base.

I'm not anti-American or anti-troop. I'm not really supportive of the reason all those fine men and women are there. But I dig the troops.

Most of them are just doing what they're told.

Absolutely. That's why I'm their fan.

That's why I'm surprised that the people who are actually in authority would let you anywhere near.

The last thing I'm gonna do is go out there and say. "You guys are here for no good reason." I'm not gonna be a morale buster. When you go on the USO thing, people just wanna know, you know, "What's it like at home?" You answer any question they want. They ask you, "So you toured with this band. What's he like?" You tell 'em. You tell 'em stories. You look at photos of their wives and kids. You sign autographs for 'em. You hang out. People just want someone they don't see every day to hang out with. All those guys and girls are all heroes to me. I just think that this war - I just don't hold with all the reasons why we're there.

Do you do performances in addition to just hanging out?

Yeah. I can touch on stuff that doesn't - I always say to them stuff like "There are a lot of different opinions on this war ... but everyone's on your side. You watch the news. ... You can see that there's a lot of discussion about this war. But the bottom line is everyone wants you guys home. Everyone wants to see you home with your wives and kids, and we all dig you." And that's the truth. So I've found myself quite effective over there, so I volunteered for another tour immediately.

That's my company. We do a lot of stuff there. We publish books, DVDs, CDs. We have a few different labels underneath the umbrella. And a lot of the stuff we release, money goes from each release to a different charity. The company is a bit of a benevolent cash engine. We raise quite a bit of money, actually, for different orphanages, we work with the Southern Poverty Law Center, the Partnership for a Drug Free America, we work with the West Memphis Three. ... I do a lot of charity work as well. That's kind of what we're doing. Most of the stuff we release is by me so I can have complete control of what I'm trying to do, and not take it from the man as it were. And also, when you make all the stuff yourself, when you print up the pieces yourself, you find how cheap the stuff is to make, and we sell the stuff at basically half the price you see a lot of stuff at.

You're selling some $2 novels.

... It's hard to sell someone a book by a writer they have no idea the name - It's hard enough to get people to read a book anyway. It always has been. ... But we do a lot of CDs like ten bucks, DVDs ten bucks. Just because ... we know how much this stuff costs. And there's just no way I'm gonna charge you full price for this stuff. I can't do it. I just can't. I don't want your money that bad. I can't stomach that kind of greed. And I'm just way too cynical to do that to people who are brave enough to endure me for the last twenty-some years. And it's been that long.

It's been over ten years since the West Memphis Three were put away. Has there been any progress?

We've raised over a hundred grand for them and given it to their attorneys, and they can use that to test DNA when the state of Arkansas allows them to test it. And that's the thing. They've got to get permission, and the state gets to pick the piece of evidence. So it's up to Arkansas to make the move, and they keep blowing off the defense's requests. ... And that's tough for these guys. They want the DNA evidence tested. They want to prove their innocence. ...

Are you aware that Hank III has ripped off the Black Flag logo?

Yeah, he's a buddy of mine. He sang on the "Rise Above" benefit record [a Black Flag tribute album to benefit the West Memphis Three], and he calls every once in awhile. You couldn't meet a nicer guy. ... You used to see him on stage with Black Flag shirts. That's why he was the first guy I called to be on the "Rise Above" record. ... Hank sings "No Values" on that record, and that vocal kills. The guy is so talented. Yeah, we're all Hank III fans over on our side.

How do you satisfy your urge to rock these days?

... I have another project planned for this summer, and all the people are in place and everyone's on board. I've just got to corral everyone together and throw 'em in a practice room and say, "Okay, incubate."

Can you tell me about it?

Nope. It's one of those things where we're gonna go into a room and play. They've all played with me, but they've never played with each other. I'm the nexus. On paper it looks like it could be really cool, but you never know til you get there. So we'll book a week of practice, and we'll just go in there and make all kinds of horrible noise. And if it's horrible in a good way, we'll pursue. If it's just "ugh," we'll laugh and say we gave it a shot and we had fun, and everyone will go their separate ways.

Where do you keep your Grammy?

I gave it away. I no longer have it. I say Sheryl Crow pick up an envelope that night for "All I Want to Do is Have Some Fun," and I realized the Grammies or any trophy for artistic achievement really is meaningless to me. It's cool to be acknowledged by your peers, although I don't find the NARAS [National Academy of Recording Arts and Sciences] people really my peers. And when you see who they give Grammies to - Justin Timberlake - "I want to rock your bah-dee" - Y'know, you can take your Grammy and put it somewhere. I don't care. I just want to do my thing. ... I'd rather get a nice letter from someone who goes to see me play than a Grammy. It was an interesting evening - getting a Grammy and almost not being allowed up on stage to get it 'cause they thought I was some yahoo. I walked up there, I said, "Isn't it funny, a guy who looks like me standing in front of people who look like you holding something like this?" And they went, "Huh?" And I went, "It's alright. See ya." ... I stood in line with Kirk Douglas to be interviewed. Beautiful nose. Handsome man. Great jaw line. IT was no big night of my life. I hung out with Gene Simmons that night, that was the high point for sure.

Just a point of interest - Sony has copyrighted the phrase "Shock and Awe."

Good for them. Aren't they just darling.

I'm sure they have patriotic intentions.

I think they're doing everything they can to stay afloat. They've been screwing their fans so hard for years. They got so mad at them they started suing them, and now maybe they're gonna bomb them. Maybe they're gonna invade their fan base. ...

What was it like to voice "Mace Griffin: Bounty Hunter?"

No. "Over here. Duck." It was just some work to me. I don't play video games.

Are you still getting tattooed at all?

See you at Liberty Hall.

I've always had a good time in Lawrence. First time there, summer 1982. And I've been coming back ever since, actually. And it's always a good time there, with a band or on my own. It's always a really good show. And that's why - it's a small town, but it's always on the schedule. I do a lot of small towns. I learned that in Black Flag - you go everywhere. Lawrence is always cool. I just wish I had a chance to hang out with Burroughs. His assistant would come at least once a tour for like five years and say, "Hey, why don't you come over and hang out with Bill?" And it was always at sound check time. And I don't know much about William Burroughs - I could never get through the books, but I definitely think it would have been an interesting hour to have kicked it with the man. ... I just wanted to meet the guy 'cause I loved the voice. The books I was never able to get through, and I tried. "Cities of the Red Night," "Junky," all that stuff. I tried, and I just couldn't. Twenty pages in - and it's not that it sucked - I sucked. I just couldn't do it. But then you hear him on those spoken word compilation records, and that voice - and he's so funny. ... I did a poetry festival once and he was just great on stage, and the place was packed. I always wanted to shake the hand.