For a change, the most deserving nominees will nab the prize at the Academy Awards 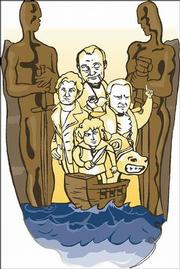 For as much ballyhoo as the Oscars received over giving surprise nominations to cutting-edge work, the actual winners sure appear to be a foregone conclusion.

This is a year where one drama is expected to dominate the acting races ("Mystic River") and one fantasy epic is supposed to capture everything else ("The Lord of the Rings: The Return of the King.") Those handicapping this ultimate cinematic contest shouldn't be too far off in their predictions, leading to an Oscar telecast where the opening of the envelopes may be the least entertaining part of the evening.

Although ABC censors will be running a five-second delay on the event to prevent anything TOO wacky -- thanks so much, Janet Jackson -- it shouldn't derail much of the event's built-in amusement.

And speaking of delays, there are plenty of meritorious actors and films that have gone unrewarded by the Academy of Motion Picture Arts and Sciences for far too long. That will all change on Sunday.

Think of 2004 as the year when the most deserving nominees will actually win for a change.

Remember the "Sesame Street" song with the refrain "One of these things doesn't belong here?" That "one" nominee would be Jude Law for his Southern hero in the Civil War drama "Cold Mountain." The Adonis-like Law is a great actor, but he is saddled with a generic good guy role that nearly any A- or B-list star could render.

It's especially gratifying to see Johnny Depp earn a nomination for "Pirates of the Caribbean: The Curse of the Black Pearl." If ever the phrase "he MADE that movie" applied to an actor's impact, it's here with Depp. Doing for the dormant pirate genre what Russell Crowe did for the gladiator tale, Depp's prissy, mouthy swashbuckler took a project based on a theme park ride and turned it into one of the year's most purely entertaining blockbusters. It's not out of the question that he could win this category.

On the flip side of the fun spectrum is Ben Kingsley of "House of Sand and Fog." The past Oscar winner gives a lesson in controlled rage as a former Iranian colonel who gets into a property dispute with a stubborn homeless woman (Jen nifer Connelly). But the film is so gloomy and nihilistic that it's difficult to get behind.

The real race is between Bill Murray ("Lost in Translation") and Sean Penn ("Mystic River"). Both represent crafty veterans who have been a part of the public consciousness for 25 years, starring in dozens of acclaimed pictures.

The difference between the two, however, is that Penn completely immerses himself in his role as an ex-con seeking emotional closure and lethal retribution with respect to the unsolved death of his daughter. At no point do we even remember that we are watching an actor on the screen; Penn just appears to BE this character.

Whereas with Murray, it always seems like we are watching the comedian do a cheeky variation of himself.

Based on Penn's superior work and his legacy as a near-deity among a younger crop of voters, he should win his first Oscar this weekend.

This is the mightiest group the category has fielded in years.

It features the exalted old-guard (Diane Keaton, "Something's Gotta Give"), the audacious newcomer (13-year-old Keisha Castle-Hughes, "Whale Rider"), the out-of-left-field indie nominee (Samantha Morton, "In America") and the hot property who was previously snubbed (Naomi Watts, "21 Grams" -- who should have been recognized for "Mulholland Drive" three years ago).

But this bunch also includes Charlize Theron, who has more momentum going for her than any actress I can ever recall. As executed serial killer Aileen Wuornos, the South African ex-model gives the kind of career-defining performance that Academy voters drool over. She gains weight, uglies herself up, runs the gamut of base emotions and commandeers every scene she is in. No way Theron loses.

Sean Penn, center, should win Best Actor for his role in the harrowing drama, "Mystic River."

Here's where things start to get interesting. I'm predicting this will be the lone major category to endure a true upset. But who will be the lucky fella?

Most are betting on Tim Robbins for "Mystic River." The towering actor is like the reverse image of Penn's aggressive character. With his eternally slumping demeanor and naked emotions, Robbins gives an indelible performance in a film filled with formidable competition. Yet, away from this role, Robbins is one of the most irritating people on the planet. His smug political grandstanding to the media is suffocating. You can't throw stones at a crowd of Hollywood protesters without hitting Robbins, and his personal views will cost him on Oscar night.

Alec Baldwin has played some memorable roles in the past (his seething walk-through in "Glengarry Glen Ross" is one for the ages). While his portrayal of a fading casino owner/mobster lets him cut loose more than, say, his turn in "Dr. Seuss' Cat in the Hat," that type of familiar character is the villain du jour in many a Vegas-centered flick. Plus, the movie is rather disappointing overall.

Benicio Del Toro won too recently for his better performance in "Traffic." His ex-con in "21 Grams" is first-rate, but nothing that is going to earn him a second statue in three years.

Ken Watanabe is quite lordly as the leader of the renegade warriors in "The Last Samurai" -- especially considering most of the English he spoke he learned phonetically. However, the support for "Samurai" has faded faster than that for "Cold Mountain." (Also, Warner Bros. is dumping all its campaigning muscle into fellow nominee Robbins.)

The surprise winner for Best Supporting Actor will be Djimon Hounsou. The native of Benin, West Africa, has been a solid factor in efforts ranging from "Amistad" to "Gladiator." But never before has he seemed so much larger than life yet so emotionally vulnerable than as the hermit-like neighbor in Jim Sheridan's "In America." Plus, this is an intimate movie that people absolutely worship. He'll reap the rewards of starring in the most beloved film within this category.

Pirates of the Caribbean: The Curse of the Black Pearl ** 1/2

Taking a Disneyland land ride and turning it into a feature film may sound a little fishy, but there's nothing wrong with an excuse to make a goofy pirate movie, especially one that has creepy zombies. Fortunately, Johnny Depp helps keep this comedy/ horror/ action flick afloat, thanks to his oddball, androgynous performance.

Previous Oscar recipients Holly Hunter and Marcia Gay Harden are nominated for roles in which they are often overshadowed by their co-stars (Evan Rachel Wood in "Thirteen" and Robbins in "Mystic River," respectively). It is dominant performances that win these categories, not subtle ones.

"House of Sand and Fog" star Shoreh Aghdashloo and "Pieces of April" standout Patricia Clarkson give that type of performance. The Tehran-born actress really holds her own opposite Kingsley, showing herself to be a major talent. As does Clarkson playing a cancer-stricken mother, although many feel her work in "The Station Agent" was just as honor-worthy as "April." (We in the Kansas City Film Critics Circle gave her Best Supporting Actress for that film instead.) Either of these two is probably the most deserving choice.

However, Renee Zellweger has the showiest part of any nominee. As I wrote in my original "Cold Mountain" review, "Zellweger adds a feisty energy to the duller portion of the film. Regrettably, it's difficult to believe her character for a minute ... She'd be right at home in 'The Divine Secrets of the Ya-Ya Sisterhood,' but her presence here is like inserting Calamity Jane into 'The Red Badge of Courage.'"

Of her three total nominations (previously for "Bridget Jones's Diary" and "Chicago"), this is Zellweger's weakest work. But it's just the type of gap-toothed yahoo role that the West Coast cabal will likely appreciate.

It is praise enough that Sofia Coppola becomes the first American woman ever nominated for Best Director. The phrase "It's just an honor to be nominated" is also tailor made for Brazil's Fernando Meirelles, who helms the brilliant street crime flick "City of God." (Although, he is knee deep in a battle over whether Katia Lund should have received co-directing credit for the feature.)

The reliable Peter Weir has the misfortune of releasing a movie in the wrong year. If not for the "Rings" finale, the Australian's epic "Master and Commander: The Far Side of the World" would be a frontrunner.

This award really boils down to Clint Eastwood for "Mystic River" or Peter Jackson for "The Return of the King." Does the squinty gunslinger have what it takes to out-duel the Kiwi troll?

As Dirty Harry Callahan might say, "Do I feel lucky? Well, do ya punk?"

Not lucky enough to wrest the statue from Jackson.

"Seabiscuit" is too lame.

"Lost in Translation" is too subtle.

"Master and Commander" is too testosterone-heavy.

"Mystic River" is too depressing.

Let's face it folks, after 9 hours and 18 minutes of screen time, "The Lord of the Rings" trilogy has officially established itself as the greatest cinematic franchise of all time. Yes, I admit that "Return of the King" is my least favorite of the three -- those interminable endings tested my patience more than a "Full House" marathon -- but in the grand scheme of things, "Rings" rules them all.

Jackson's epic will become the first fantasy to win the Academy Award for Best Picture, which opens the door for maybe even a horror movie or -- gasp -- a science fiction flick to one day nab the coveted award. Future period dramas and biopics beware.