The Get Up Kids prepare to release fourth full-length album 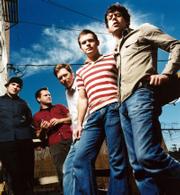 The Get Up Kids are no longer kids.

Anyone who's followed the band for the last decade knows that, and anyone who got aboard the GUK train for the band's mature-sounding last record - 2001's "On A Wire" - probably had never heard the band's emo-heavy early works.

As the band prepares to release its fourth full-length album, titled "The Guilt Show," lead singer and songwriter Matt Pryor has high expectations for the record.

"The point of every record you make is to try to make all the other ones obsolete, and that's the goal with this one," Pryor said. "I would say by far it's the best record we've ever done."

"This is like Saved By the Bell, the last year before they all went to college," he said. "But we're going to push the envelope - you can quote me on 'push the envelope' - and make it so that our TV show about the college years actually gets played."

Off the wire
In many ways, "The Guilt Show" figures to be a pivotal record for the band. Though "On A Wire" was well-received by major publications like Rolling Stone (who gave it three stars), it was criticized by a number of indie music magazines that pledged allegiance to the band's emo-defining early albums, including "Four Minute Mile" (1997) and "Something To Write Home About" (1999).

Pryor said he didn't put too much weight in the reviews on "On A Wire."

"I love that record and so ultimately I don't give two fucks if anybody else likes it," Pryor said. "People snapped to a lot of judgments about that record... you could read the reviews and be like, OK, you put this in and the first song's got an acoustic guitar and a train beat over it so you think it's crap."

Though Pryor said critical response to "On A Wire" had no effect on the way he approached writing songs for "The Guilt Show," he did learn a few things from touring in support of the last record.

"I really wanted to up the ante and put songs on this record that were gonna bowl you over when we played them live," he said. "When we played a lot of songs from 'On A Wire,' some of them were just mellow and quiet and it didn't make for the most engaging live performance."

The change is evident from the opening chords of "Man of Conviction," an anthemic pop number reminiscent of the "Something to Write Home About" material. Songs like "Wouldn't Believe It" and "Martyr Me" also mark a return to more straightforward pop, propelled by the seasoned rhythm section of brothers Ryan and Rob Pope (on drums and bass, respectively).

The album mixes the sophistication of "On A Wire" with the youthful energy of "Four Minute Mile," creating an album as memorable for its mature compositions as it's ability to juice up a concert hall with pogoing teenagers.

Perhaps the most notable change from "On A Wire" is the preponderance of keyboards. Even during the heaviest parts, Dewees' piano lines are prominently featured.

"James would go into something and (Scott Litt) would be like, 'No jazz chords! Don't do that! One hand!'" Pope said. "We've been doing this for a long time and to have someone come in and try to go for his sound as opposed to our sound was a little stifling."

Martyr Me
To make "The Guilt Show," the band spent 58 days (spread out between April and October) at Eudora's Black Lodge Studios, which the band, along with producer Ed Rose, purchased last year. The laid-back approach allowed the band to do much of the songwriting in the studio and spend endless hours experimenting with different sounds and tricks.

Pope even went so far as to set up three drum sets in three different rooms and splice together the results, creating a situation where one song could in fact have three completely different drum sets.

Lyrically, "The Guilt Show" may be Pryor's most intimate record yet. Even the poppiest songs deal with darker themes: "Trespass fits you like a charm / A scarlet letter on your arm," Pryor sings over the bouncy hook of "Wouldn't Believe It."

Ryan Pope said he picked up quickly on much of the record's lyrical content.

"It's a lot about issues between friends," Pope said. "There was lot of laughing, a lot of 'Oh, shit ... Did he really just say that?"

The band came up with the title of the record by chance, misreading a sign on the way to the studio that read "The Eudora Guilt Show."

"It does seem to work rather well," Pryor said. "There's a lot of content on the record about betrayal in one form or another, and guilt seems to go hand-in-hand with betrayal."

Men of conviction
The band's label, Vagrant, has already lined up a busy schedule of "shaking babies and kissing hands" (as Rob Pope puts it) to promote the record, including a month-long tour, a week of flying across the country to do in-store appearances and gigs on "The David Letterman Show" and "Late Night With Conan O' Brien." 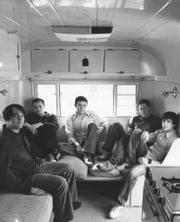 Pryor said he was trying to squeeze in as much promotion for the record as he could before his wife gave birth to the couple's second child in August.

"I'd be perfectly content to just record records and then play at the Bottleneck and have everybody in the world come here to see us," he said. "I really don't like touring, but it's part of the deal."

The band also recorded a session for iTunes that will fans will be able to listen to for 99 cents a song. The songs, which feature stripped-down versions of "Guilt Show" material and songs off the band's first two records, were recorded at Black Lodge during a weekend in February.

Fans have been able to listen to the entire album on the band's website since early February. Though the band had initially planned on putting up a song a week, it abandoned that plan after the album leaked out on popular file sharing programs like Kazaa.

"I think it's going to end up being very beneficial because I think a lot of our fans were very curious about what the hell we were doing, after that last album," Ryan Pope said.

The band also recently completed a video for the album's first single, "The One You Want." The video, shot during a weekend in Cincinnati, features the band playing in an old-fashioned diner with a cast of 60 dancing extras.

The band is hoping the video will fare better than the single from "On A Wire" ("Overdue"), which received a few late-night spins on MTV and about a week in rotation on MTV2.

"We can only do so much on our end to try to make that happen," Rob Pope said. "People can only tell you for so many record cycles that you're going to be huge before you stop believing it."

Something to write home about
The "Guilt Show" tour will stop in Lawrence on April 24 at The Granada. The show will be the exception to the band's recent approach to performing locally, which typically includes benefit shows and crudely planned unannounced shows (the record release party for "On A Wire" drew more than 200 people to The Teepee in North Lawrence).

"We'll probably book it a day in advance and just tell our friends," he said. "It seems ridiculous for us to drive down the street and play a show and get paid a lot of money."

The Pope brothers are also plotting a move to New York later this year, though they inevitably plan to return to Lawrence, where they have homes and a studio. 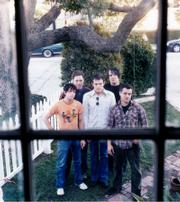 "We've spent a lot of time in every college town in this country and coming back to Lawrence is always a breathe of fresh air," Ryan said. "The amount of musicians that come of out this town is pretty hot."

As for Dewees, he's still busy plotting "The Get Up Kids: The College Years."

"We haven't decided on a major yet but I think we're gonna make it so we only have to take the minimum amount of hours," he said. "Probably like communications, or public relations. I don't know, something that football players take ... We gotta take a lesser amount of school so that we can focus more on our sport."