Los Angeles — The honeymoon's over for Ben Affleck and Jennifer Lopez, but their mob-comedy flop "Gigli" really cleaned up Saturday at the Razzies, the first movie to take all six top trophies in the annual dishonorable-mention awards.

"Gigli" hit theaters last summer amid the tabloid frenzy over Affleck and Lopez's on-again, off-again wedding plans. They finally announced in January the romance was off.

The movie, which starred Affleck as a thug smitten by Lopez as a lesbian crime colleague, fell short of the record seven Razzies won by "Showgirls" and "Battlefield Earth."

"But those are much better bad movies, if that makes any sense," said Razzies founder John Wilson. "If you sit through them with the right people or the right brand of liquor, they can be strangely entertaining.

"But I don't care how medicated you are or what people you're watching it with, 'Gigli' is just a pain in the posterior. It's one of those things that is, as opposed to enjoyably embarrassing, it's just skin-crawlingly embarrassing."

"Gigli" cost $54 million to make but earned back just $6 million.

Among other "winners," Sylvester Stallone padded his Razzie resume with a record 10th prize, this time for worst supporting actor in "Spy Kids 3-D: Game Over." Stallone's past Razzies include one for worst actor of the 20th century.

With the 25th annual Razzies coming up next year, the group is considering a special career-achievement prize for Stallone, Wilson said. 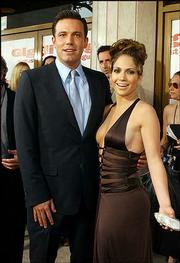 Ben Affleck and Jennifer Lopez pose for photographers as they arrive at the premiere of their film "Gigli," in the Westwood section of Los Angeles. "Gigli," which won the scorn of critics nationwide, was honored Saturday as the worst movie of 2003 at the Golden Raspberry Awards in Los Angeles.

Demi Moore took the supporting-actress Razzie for her comeback role in "Charlie's Angels: Full Throttle," which also was named worst remake or sequel.

"She tried to come back, and we said, 'No, thanks. We chased you away before. Go away again,'" Wilson said.

The storybook adaptation "Dr. Seuss' the Cat in the Hat" won the Razzie for worst excuse for a movie.

Another top nominee, "From Justin to Kelly," was shut out in the awards balloting by the roughly 600 Razzie voters.

The group decided to give the movie, a spring-break romp featuring "American Idol" stars Kelly Clarkson and Justin Guarini, a special "governor's award" for distinguished underachievement in choreography.