Review: 007: Everything or Nothing - Game Boy Advance

At least it's better than rearranging your sock drawer.

Thanks to a non-compete clause, Everything or Nothing can't come out on the consoles until later this year. So we get the GBA version as an appetizer. For the most part, it may be able to whet your appetite. 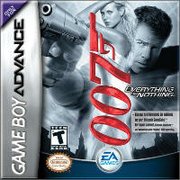 From a top-down and diagonal perspective, you take on the role of Bond in this original adventure. Most missions have the find-item-to-get-here regime that works fairly well and linear. You can assault your enemies head on or sneak stealthily to your objectives. The game's diagonal-only control may seem wonky at first, but it's not unbearable.

Some missions have you driving and shooting, a feel inspired obviously by the old Spy Hunter series. Again, the perspective can be awkward but livable.

The main issue with Bond is that' it's relatively mundane 50% of the time. Sure, it's better suited to the small screen than Nightfire was, but the fun factor doesn't reach a purchasable level. The graphics are functionally solid and the sound is great, but if you have a chance to rent it and whiz through it, that might be your best bet.