A multi-branching experience not to be missed. 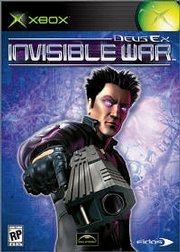 The RPG elements sprout into a true choose-your-own-adventure not seen in full since the previous Deus Ex. Sure, KOTOR and Morrowind had those elements, but the branches in DEIW beget more branches in a wonderfully enveloping sci-fi fantasy world.

This action and consequence system deepens still after you've apparently chosen a "side" with multiple endings ensuing. What makes the games even more cool is that time can be spent beyond the story-affecting branches. Early on in the game I acquired a shotgun by knocking on random doors in a hotel until I got some people that sounded like bodyguards. I told them I had the wrong door, then proceeded to the roof where I shot out the skylights, startled them, and I dropped in while using the invisibility biomod (Biomods are special abilities and enhancements you can choose to use given certain conditions). In the short time I was invisible, I snuck behind a table in the dark dining room until they guards figured the glass breaking was a random phenomenon. I then regained enough biomod energy to go invisible again, suck behind one of the guards, shot him in the head and took his shotgun. The other came in quickly to investigate, not seeing me, and I repeated my tactic on him. With my new weapons, I went out the front door to continue my storied mission.

This is what makes DEIW a joy to play for its 20+ hours. It definitely isn't because of the graphics. The character models are decent, displaying apparent edges, though. Some stages use plenty of effect layers with lighting and shadowing, but doesn't help the muddy and uninspired textures. The framerate has a lot of trouble locking in at 30 fps. If you choose to shoot everything in sight (which you hardly need to), aiming can tend to become a chore in intense situations.

The sound earns extra points by being location-specific in regards to decibel level. A talking character will sound louder if there is no wall between you two. If there is a wall-type object, the voice will distort or soften accordingly. Cool.

KOTOR-oriented gamers will enjoy this much more than the Halo-only gamers. In fact, if you are an action only guru, Invisible War may be disappointing. But with what Ion storm intended, they achieved with great success.