A pleasure full of personality and strategy.

The GBA has become a wealth of great RPGs as of late, and the record doesn't stop with Fire Emblem. 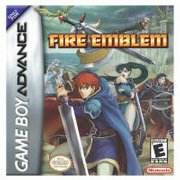 It's been years since we've seen the Emblem franchise on this side of the world. The turn-based strategy-role player is warmly welcomed on the handheld. Sure with it you get a familiar attack/turn system, but what sets Fire Emblem apart from other RPG's is the depth of true character development and rule-braking strategy.

In Fire Emblem, you don't get a bunch of talking heads. You get personalities. The style of language differs in addition to abilities. Also, with respect to magic and weapons, you still have the A beats B, B beats C, but C beats A combat, but depending on how far your character has grown in level, the rules may be broken. It's this sort of depth that is a joy to explore and master, a task that may take upwards of forty hours.

This GBA version seems to get everything right. It even let's you suspend lengthy battles and turn your handheld off if you have something else to do, which I guarantee will happen.

There is nothing particularly eye-catching or ear-pleasing to the experience, but developer Intelligent Systems (Advance Wars 1 & 2) fully flaunts the "Gameplay speaks louder than Graphics" philosophy. In this case, I couldn't agree more.