Don't even think about it.

Developing three-dimensional games is a tough chore on the Game Boy Advance. Some games have had moderate success and others are a complete failure. SSX 3 joins the latter-half in this clunky and broken effort. 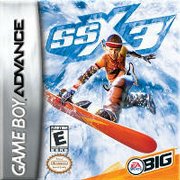 You get your selection of boarders, Psymon among other familiar crew and set out on a selection of race modes sort of like the console "counterparts." From the start, the game seems slow, extremely pixilated and unresponsive. The controls, although simplified for the GBA, seem to take an extra half-second to respond, making quick decisions absolutely void. This alone should be enough to keep you from even thinking about picking this one up.

If you can wade through the extreme gameplay flaws, there is a short experience to be had. Most likely there will be no fun involved in this inferior companion to the SSX series.