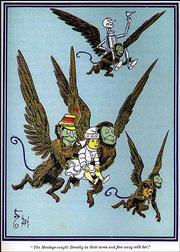 I confess: When I found out this year's Read Across Lawrence book was "The Wonderful Wizard of Oz," I rolled my eyes.

A full off-to-the-left, waaaay-over-the-top, then long blink kind of roll.

It's my quiet way of dismissing ideas I think lack merit.

Why in the world would we embrace a story that spawned such corny lines as "I don't think we're in Kansas anymore" and portrayed the state as a gray, undesirable place to live?

Then I realized that I'd never read L. Frank Baum's book.

All the annoying "Wizard of Oz" figurines and T-shirts I've seen at Kansas airports and all the hokey lines of dialogue that vex me come from the 1939 MGM movie that I watched on television every year growing up.

Don't get me wrong. I loved that movie. Still do. And if human beings didn't possess the practical tendency to categorize knowledge based on single associations, I probably wouldn't be writing this.

But I've never been comfortable with the idea that there are people all over the world who only know about Kansas BECAUSE of "The Wizard of Oz," and they see the state through the lens of the movie: barren, black-and-white, worthy of running away from and likely to produce young women who, once they do get out into the big bad world of Technicolor, are scared to death.

Judy Garland could sing like a sparrow, but for a farm girl, she doesn't have much chutzpah.

Which brings me to Baum's Dorothy.

She's easily half Judy Garland's age. Despite living in drought-stricken surroundings with impoverished farmers, her peals of merry laughter light up the dreary circumstances (indicating she probably would never consider running away like her silver-screen counterpart). And once she lands in Oz, she's the picture of grace, ambition, ingenuity and determination in her quest to return home.

Needless to say, it didn't take me long to like her.

After she explains to the Scarecrow how a cyclone has carried her to "this queer land of Oz," he says: "I cannot understand why you should wish to leave this beautiful country and go back to the dry, gray place you call Kansas."

"That is because you have no brains," she replies resolutely.

I laughed out loud. How many times I've wanted to issue an identical retort to people who just don't get it.

See I'm a Kansas girl -- lived here all my life.

I've always resented characterizations of Kansas as flat, uninteresting and ugly. Such comments most often come from motorists who experience the state from I-70, a long stretch of often-under-construction highway that etches a stick-straight line through possibly the most unscenic section of the state. Those people are usually on their way to the mountains, which, though beautiful, lack subtlety.

Appreciating Kansas is like enjoying a fine art-house film. Some of its beauty lies in its wide-open spaces. There's nothing quite like the Flint Hills coming alive with wildflowers and insects in the spring and then dying with the burnished auburn glow of autumn prairie grass. Or watching the sun set or a storm brewing in a western Kansas sky that's so unobstructed you can see a 360-degree horizon.

I doubt Kansas' geographical critics have visited Monument Rocks, Hell's Half Acre or Scott County Lake, where the northernmost indigenous American pueblo dwelling was found. And then there are the hard-working, down-to-earth people who live here and are just as likely to greet a complete stranger with a smile as they are members of their own family.

But I digress. I finished Baum's book quickly. After all, it is, first and foremost, a children's book, "written solely to pleasure children of today," the author wrote in its introduction.

I've drawn a few conclusions. First, I think Baum respected Kansas. The New York native never lived here, but conditions in South Dakota, where he worked as a newspaperman for some years, were similar. It's telling that only the character who lacks brains can't understand why Dorothy longs to return to her life.

Second, no matter how irritated I get when people mingle "Wizard of Oz" references -- sometimes mockingly -- with mentions of my home state, it's nice that people the world over can include Kansas in the list of American states they've heard of.

And finally, if I had only seen the movie but never read "The Wonderful Wizard of Oz" until last week -- and I have an English degree -- then there are thousands of others just like me in Lawrence. In the past several decades, scholars have written volumes of literature about Baum's make-believe world, which means Lawrence readers will have plenty to talk about as they gather together to take a critical look at the book throughout February.

So this year, instead of sitting on the couch and letting MGM feed Dorothy's adventure to you, try reading the book and escaping in Baum's original vision of a yellow brick road, four unlikely friends and their journey to a bogus wizard who forces them to rely on themselves -- and a little magic.

At the heart of his modern fairy tale lies a timeless lesson. Remember Dorothy's response to the brainless Scarecrow who doesn't understand her desire to return to Kansas? After she points out his compromised mental capacity, she continues with this bit of wisdom:

"No matter how dreary and gray our homes are, we people of flesh and blood would rather live there than in any other country, be it ever so beautiful.

Now that's a line to be remembered by.