Chicago — When he first walked into the dingy gym on Chicago's South Side back in 1988, Loic Wacquant had never attended a boxing match and didn't know a left hook from an uppercut.

"As they say in the ring, I'd 'never smelled a glove,"' says Wacquant, now 43. "I knew so little about what I was doing that in my whole first training session, I kept my glasses on."

"Our first nickname for him around the club was 'Mr. Magoo,"' says Wacquant's former sparring partner, Ashante Moore. "Some of us were laying bets that first week that he wouldn't be back, but he kept showing up."

And after several years of training by the late coach Herman "DeeDee" Armour at the Woodlawn Boys Club gym, Wacquant's punching speed had earned him the name "Busy Louie." He was skilled enough to compete in Chicago's Golden Gloves tournament as a junior welterweight, and he even had thoughts of turning pro.

It was quite an accomplishment for a narrow-shouldered, French-born scholar who was simultaneously completing his doctorate in sociology at the University of Chicago.

But Wacquant prides himself on being a most unacademic academic. He believes passionately that theory and statistical analysis have to bow at times to firsthand experience.

He documents his firsthand experience of the boxing world in "Body & Soul: Notebooks of an Apprentice Boxer." The book, originally published in France last year, has been released in English by Oxford University Press, with Wacquant doing the translation himself.

Wacquant, a professor at the University of California, Berkeley, is soon to take a post at the New School for Social Research in New York City.

He discussed his book and his time in the ring with The Associated Press while participating in a panel discussion this fall at the annual convention of the American Anthropological Assn. in Chicago. He spoke of his "libido pugilistique," which is how a French sociologist says he loves boxing.

"When I had to leave boxing because I had been elected to the Society of Fellows at Harvard and had to move to Cambridge, I went into a major depression," he says. "It took me time to be converted into a boxer, and it took me even longer to be reconverted to an academic. Even now, 12 years later, there are moments when I just want to put on the gloves."

Wacquant says his first visit to the gym began as an academic exercise, but almost immediately changed into something much more primal. He explained that he had come to Chicago to study the city's black ghettoes and became frustrated that most of his fellow postgraduates were studying the nearby black neighborhood of Woodlawn only from a distance. When a friend told him about the athletic club only two blocks from his apartment, he jumped at the chance to visit. 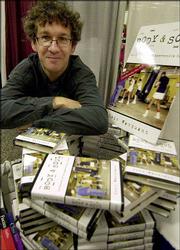 French sociologist Loic Wacquant poses with copies of his book, "Body & Soul: Notebooks of an Apprentice Boxer," at the American Anthropological Assn.'s centennial convention in Chicago. Wacquant, a professor at the University of California, Berkeley, doubled as an amateur prizefighter while completing his doctoral degree at the University of Chicago in the late '80s and early '90s.

"I thought I could use the boxing gym as my window into the ghetto," he said.

But in his first meeting with Armour, Wacquant realized that the gym wasn't a place to pull out a notebook and begin doing interviews. It was a temple of sorts, and if he wanted to stay there, he'd have to convert.

"Teach me to be a boxer," he told the elderly coach, and Armour proceeded to do so, treating his only white student just the same as his stable of black fighters. That stable contained both talented amateurs and some up-and-coming professionals, including junior lightweight Curtis Strong.

The teaching -- months of it before Wacquant's first sparring session, and several years of it before his first actual bout -- consisted of a monotonous and exhausting daily routine of shadowboxing, heavy bags, speed bag, uppercut bag, jump rope and calisthenics, plus miles of roadwork every day in Chicago's notoriously changeable weather.

"When I first started, I thought I'd do maybe two sessions a week," Wacquant said. "Pretty soon I was doing three or four -- sometimes six."

He also was spending additional hours each day with Armour, who became a sort of surrogate father. Wacquant's doctoral work shrank to several hours in the mornings; boxing filled the rest of his days.

"After a while, I had nothing to do with campus life," he says. "I didn't even like going on campus because it didn't seem real. Only the gym was real."

He discovered that his fellow boxers did not come from the poorest of the poor, as they are sometimes portrayed, but were often young working-class men from stable families. They came to the gym as a refuge from the gangs, drugs and violence of the streets, as well as to learn a skill which would give them social prestige, and possibly money.

They paid for those advantages with exhaustion, pain and total obedience to their coach. And, like Wacquant, they had to convert to a quasi-religion; a faith with strict rules of abstinence regarding food and drink, social relations outside the boxing community, and even sex.

"When boxers in training for bouts had sex with their own wives, they would confess, 'I cheated,"' Wacquant recalls.

The high point of Wacquant's life in that universe was his appearance in the 1990 Golden Gloves tournament. He won his first bout by default when his opponent failed to make the 138-pound weight. He lost his second in a three-round decision that was disputed by his Woodlawn club mates. Their acceptance and enthusiasm helped fuel his dream of turning pro until Armour put an end to such notions.

"If I hear you gone downtown (to apply for a professional boxing license), I will personally crack your forehead and break your kneecaps," Armour promised.

Wacquant has dedicated his book to Armour's memory.