Though he died in an unfashionable decade, 'Elvis Fashion' is no oxymoron, author says

New York — Take the words "Elvis" and "fashion" and put them together, and unfashionable images might spring to mind: white jumpsuits, loud polyester prints or the divinely tacky decor of Graceland, the King's home.

Blame the 1970s, not Elvis Presley, says Julie Mundy, who wrote "Elvis Fashion" (Universe) with the cooperation of Graceland. 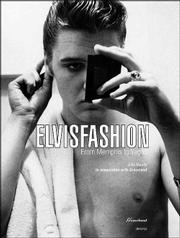 "Elvis died in the most unfashionable decade. So he hasn't had the chance to redeem himself," says Mundy, interviewed by phone from her home in London.

According to Presley's longtime designer Bill Belew, even Gianni Versace wished he could have designed for the King. "Elvis Fashion" documents the risk-taking style that was part of Presley's power as a rock 'n' roll icon, using rare and new photographs of his wardrobe, which has remained hanging in Graceland's closets since his death in August 1977.

In addition to Presley's stage costumes, the book offers a glimpse at Presley's personal clothing, including:

"It's hard to sort of imagine that 'Superfly' image with Elvis," Mundy says. "But when I look at music videos and I see R. Kelly and other artists, and they have the fur coat, the cane, the hat, it's very much like something Elvis would wear. That's in a music video, but he wore that casually."

One thing he never wore, though, was blue jeans. Although they were associated with rebellion in the 1950s, Presley wore jeans only if a film role required it. Mundy says he associated denim with workwear, and it reminded him of his impoverished childhood in Tupelo, Miss.

At the start of his career, when Hollywood rebels including Marlon Brando and James Dean were donning Levi's, Presley was crafting his "hillbilly cat" look -- sharp suits in bright colors, with his hair combed into a huge pompadour.

"Cat clothes are absolutely a must as far as I'm concerned. My favorite hobby is collecting these real cool outfits, and I'd almost rather wear them than eat!" Presley said at the time.

"He dressed very flashily. If he wore a shirt, he tied it or he left it open to the waist," Mundy says. A snapshot taken when Presley was on the verge of stardom shows the young singer wearing a captain's hat cocked to the side, his short-sleeve shirt open and tied at the waist. Another series of shots taken in photo booths during Presley's teen years shows his evolution from a smiling, clean-cut Southern boy to a "cool cat" with a pompadour and a heavy-lidded, smoldering gaze.

Presley and his mother, Gladys, were both fans of movie star Tony Curtis, and the young singer especially admired Curtis' hair. Photographer Albert Wertheimer, who documented a young Presley for RCA Records, told Mundy that the dirt-poor singer was fastidious about his appearance.

"He said he just spent ages and ages on his hair and he perfected wet combing into a fine art," Mundy says.

As a teenager working at a movie theater in Memphis, Presley was also fascinated by the musicians in Beale Street's blues clubs, who shopped at the Lansky Brothers clothing store. Presley became a lifetime Lansky Brothers customer, even outfitting his "Memphis mafia" cronies in their wares.

Standing amid Presley's wardrobe, Mundy says she got a sense of his obsessions -- a favorite jacket would be copied into different colors and fabrics, and he owned what Mundy calls "an infinite collection" of identical blue pajamas.

"Out of everything that sort of stands out, it's the size," Mundy says. Elvis had a 42-inch chest and his waist ranged between 30 and 32 inches most of his life. "The shirt he wore in 'Jailhouse Rock,' it's like a child's shirt, it's so small."

Belew, the designer who created the head-to-toe black leather look for the 1968 TV special that became known as Presley's "comeback," became a collaborator whom Presley trusted to execute his more and more outrageous style ideas in the 1970s.

"I think when he got to the '70s, Elvis did have complete confidence in Bill's designs. Bill said they'd made the point about Elvis' masculinity and didn't have to worry about that," Mundy says of Presley's penchant for androgynous clothing like jewelry, furs and capes.

"He put Liberace in the same outfit, and it was completely camp," Mundy says. "The Osmonds wore these suits too. But they looked like kids in play suits."

The book also includes a number of Belew's sketches of stage costumes -- including the iconic white jumpsuit that came to embody the flashy, trashy excess of Presley's last years. Despite the "fat Elvis" jokes that the jumpsuit inspired, the staying power of its image is, in a way, a testament to Presley's visual presence.

"It was a strong look for the time, and all the men in nightclub acts were wearing these jumpsuits," designer Bob Mackie told Mundy. "But Bill took the look, put it on Elvis, and it became him -- it doesn't belong to anyone now except Elvis."