We're off to read the 'Wizard'

Classic 'Wonderful Wizard of Oz' chosen for Read Across Lawrence 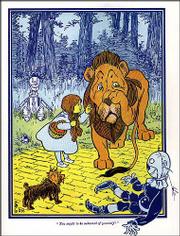 Illustration from the original printing of 'Wonderful Wizard of Oz'

That's right. We're off to read the Wizard, "The Wonderful Wizard of Oz."

If you sang that sentence instead of reading it, then you've probably seen the MGM film that popularized L. Frank Baum's fantastic Land of Oz. The movie has been shown on television so often since 1956 that nearly all American children and their families know it by heart.

But those who've read Baum's classic children's story know that Dorothy, the Scarecrow, the Tin Man and the Cowardly Lion never skip down the yellow brick road, singing about their voyage to the Emerald City in the book, published in 1900 with brilliant color illustrations by W.W. Denslow.

"The thing is, most people haven't read it," says Maria Butler, community relations coordinator at the Lawrence Public Library. "What most people know about the Wizard of Oz is what they know from the 1939 MGM movie that we've all seen over and over. The book is different in a lot of ways."

The hope is that Lawrence residents -- children and adults alike -- will discover (or rediscover) those differences by taking part in Read Across Lawrence, a program designed to turn the city into one giant book club during the month of February. Baum's "Wonderful Wizard of Oz" is the featured book for the program, now in its fifth year.

Throughout the month, visiting scholars and Oz enthusiasts will give talks and lead discussion groups; Dorothy will be prosecuted in a mock trial for theft

and murder; the connections between the movie and Pink Floyd's "Dark Side of the Moon" CD will be explored; Oz collectibles and artwork will be on display; and area youth will be invited to enter a writing contest.

The library has 30 copies of the book available for five-day checkout, and 100 copies will be distributed throughout Lawrence bearing stickers that say "Read this and pass it on."

With Lawrence celebrating its sesquicentennial this year, the library and the Lawrence school district, who jointly sponsor Read Across Lawrence, wanted to select a uniquely Kansas book.

"And this, for better or worse, is a fundamentally Kansas book," Butler says. "One of the things that we hope to talk about is, is it good, is it bad, did Baum represent Kansas accurately or not and what the legacy has been. And the legacy is huge. Oz is worldwide."

Love-hate relationship
It's true. And millions of people around the world know the state of Kansas exists because they know the "Wizard of Oz." Figurines of Dorothy in her blue gingham dress and other characters -- almost always as they appear in the movie rather than the book -- are a hit at regional airports. Developers wanted to build an Oz theme park east of Lawrence, and an artist has proposed erecting a 650-foot-tall cyclone in an Oz-based tourism district as a monument to his hometown of Kansas City, Kan. 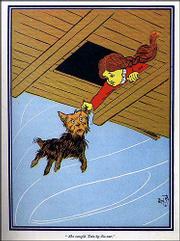 But some Kansans have grown tired of the connection between their home state and the image of a barren, sepia-toned landscape in contrast to MGM's technicolor outside world where Dorothy says "Toto, I don't think we're in Kansas anymore."

However, author and Washburn University English professor Tom Averill, who frequently teaches "The Wonderful Wizard of Oz" in his Kansas literature course, blames any negative Oz overload on the movie and argues the book has integrity. Baum's portrayal of Dorothy has a lot to do with that, Averill says.

"She's not just this young woman who's wishing to get out. She's forcibly removed from Kansas by a tornado and spends her time getting back. She's practical. She's courageous. She is a revolutionary. She completely changes the landscape of Oz by landing there. She's very democratic in adopting companions like the Scarecrow and the Tin Man and the Cowardly Lion. She kills two witches. She's a tough little kid.

"One of the things I teach in the Kansas literature course is that she's almost a prototype of a pioneer. As we read other books that show pioneer women, she's like the model."

Baum, a New York native, was, among other things, a newspaperman in Aberdeen, S.D., who advocated women's suffrage in his paper, Aberdeen Saturday Pioneer.

"Judy Garland makes a pretty bad representative (of Kansas) with her big eyes and her hysteria all the way through it," Averill says of the movie. "Dorothy in the book is calm, practical and keeps plugging along."

Oz fanatic
Oz enthusiast Jane Albright doesn't understand how being known BECAUSE of "The Wizard of Oz" can be a bad thing. The 45-year-old Kansas City, Mo., woman has been an Oz fanatic since age 12 and has thousands of collectibles to prove it.

A 12-by-15-foot room in her home is filled floor-to-ceiling with multiple editions of Baum's books, Oz dolls, toys, games, housewares, vintage clothing, figurines, record albums, pop-up books -- you name it, she probably has it or has her eye on procuring it.

"What's most fun is finding those things that have survived generations of potential abuse and are still out there and are fun to turn up," says Albright, who will lead a discussion about Oz and its illustrators on Feb. 4 and loan some of her memorabilia for display throughout the month. "I always see an opportunity like this as one in which I can help people know more about 'The Wizard of Oz' than they will ever learn by being fans of the film or even reading the book." 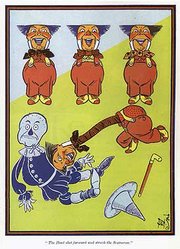 Albright, a Topeka native, remembers her mother reading her the Oz books from the time she was a little girl. At 12, she vowed to read all 40 books in the Oz series. She joined the International Wizard of Oz Club and began what's become a lifetime of attending Oz conventions, accumulating everything Oz and meeting other people who love the story as much as she does.

"From my standpoint, the fact that Dorothy wants to leave Oz and go home -- she'd rather be in Kansas; she'd rather be with her family than in this incredible fantasy land where every dream comes true -- speaks very highly of Kansas," she says. "Everybody in the whole world knows about Kansas because of 'The Wizard of Oz.' ... There's a Friends of the Emerald City Club in Moscow."

'No place like home'
Baum biographer Katharine M. Rogers notes in "L. Frank Baum: Creator of Oz" that only recently has Baum been recognized as a major children's author. He had long been dismissed by highbrow publications as a mediocre writer whose books just happened to sell well.

The fact that there even exists a body of Oz scholarship has been attributed to the re-interest generated by the 1956 television release of the movie. Despite any less-than-stellar images of Kansas the film may have propagated -- Dorothy as a hyperventilating wimp, Kansas as a place from which to run away, etc. -- the rebroadcasts directed attention back to the book.

"During the next couple of decades ... 'The Wizard of Oz' does start being taken seriously as a hefty piece of literature, something that says a lot about the United States and America and what it is to be American," Averill says. "In some senses, Kansas becomes part of that whole national dialogue about home."

'A wonderful world'
As Lawrence readers encounter the book for the first time or revisit it after many years, they'll notice differences between it and the movie. MGM's Dorothy Gale (played by American sweetheart Judy Garland) is older than the adventurous girl illustrated in Baum's book. She also is dissatisfied with her life in Kansas and runs away from home before being swept up in an Oz-bound cyclone, unlike Baum's Dorothy, who never stops loving home. And at the end of the movie, Dorothy's quest is written off as the dream of a feverish girl. Not so in the book.

Just a cursory flip through its full-color illustrations reveals elements cut out of the film, such as the fragile inhabitants of The Dainty China Country and the headbutting fortress defenders of The Country of the Quadlings.

Other differences become apparent as one reads. For instance, Baum's belief in theosophy, a spiritual philosophy that taught, among other things, that everyone possesses latent abilities that can be developed through determination and effort, show up throughout the text. So even though Baum's Scarecrow believes he's incapable of performing useful tasks because he doesn't have a brain, he knows enough to oil the Tinman when he stiffens up and to suggest cutting away a wooden bridge to thwart would-be attackers. And the Lion, who professes to be a huge coward, leaps across a deep ravine to carry his companions to safety.

Rogers contends that, although the movie shows great imagination, the book remains the superior version of the story.

Baum's strength, she writes in his biography, is that "he could create a wonderful world, and he could make it believable."

"L. Frank Baum just did a wonderful job of creating a very real sense of place when he wrote the Oz stories," she says. "It's such a real country that you think as a child that you can go visit it. Every aspect of a real place is written in such detail and illustrated so well that it just seems like a real vibrant, exciting, fun place to get to go be, and the only way to do that as a child is by reading more and more and more about the Land of Oz."