Drive-through chapel marriage to be annulled

The 22-year-old married Jason Allen Alexander, 22, a childhood friend from Louisiana, about 5:30 a.m. Saturday at a Las Vegas wedding chapel. The bride, wearing a baseball cap and torn jeans, was escorted down the aisle by a limousine driver, a source close to Spears told the Associated Press.

By that afternoon, the couple had arranged an annulment in the presence of several people, including a Las Vegas lawyer, said the source, who spoke on condition of anonymity.

Spears and Alexander, of Kentwood, La., "took a joke too far by getting married," her record label, Jive Records, said in a statement released to "Entertainment Tonight."

"Ms. Spears and Mr. Alexander have filed for an annulment which will become official on Monday," read the statement by Sonia Muckle, Jive's vice president of publicity.

Spears and Alexander journeyed by limousine to the Little White Wedding Chapel on the Strip after a stop at the Ghostbar, a club in the Palms Casino Hotel, the source said. The chapel staff told the couple they couldn't get married without a license, so they were taken to get a license and driven back to the chapel, where they were married.

"Nobody knew it was coming," said George Maloof Jr., a friend of Spears and the owner and operator of the Palms Casino Hotel.

Maloof denied rumors that Spears was drunk and had to be carried out of the Rain nightclub inside the Palms on New Year's Eve.

"I was with her the whole night," he said. "None of those reports were accurate. She was just having a good time." 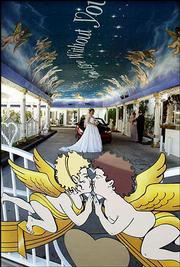 A bride waits in the drive-through wedding chapel at Little White Wedding Chapel on the Las Vegas Boulevard strip. Pop star Britney Spears was married Saturday in the chapel but quickly arranged to have the marriage annulled.

Spears was staying at the Palms but was expected to leave Sunday. Employees at the chapel declined comment.

Alexander was back in his hometown Sunday, according to his grandfather, Robert Alexander.

"He'd been through a lot. We picked him up in New Orleans coming back, and he didn't have much to say," the elder Alexander told "Entertainment Tonight."

"I wish them well," he said. "Whatever happens, happens."

He said Spears and Alexander had also spent Christmas Eve together.

Calls to Alexander's family home in Kentwood were answered by a machine. His grandmother said any details about the wedding would have to come from Jason or his father.

"We know about the wedding and stuff. It's all over the news," Betty Alexander said.