Metal outside the mold

As far as metal bands go, the members of The Esoteric are hardly the long-haired, head-banging, booze-swilling stereotypes that have dominated the genre ever since the days of Metallica and Spinal Tap. In conversation, the Lawrence fivesome is just as likely to rave about Outkast or Justin Timberlake as flagship metal bands like Faith No More or Mr. Bungle. The entire band moonlights in a gangsta-rap side project called Ballz Deep, and Cruz spins '80s songs and hip-hop for the popular "Neon" night at The Bottleneck. Guitarist Eric Graves even has an electronic side-project called Emotron that remakes the songs of bands like Radiohead and Sunny Day Real Estate into techno songs with robotic vocals.

Vocalist Steve Cruz says that's part of the band's appeal -- the ability to reach out to audiences beyond fans of heavy music.

"When you see us live, even if you're not totally into the music you can feel the energy and it'll connect with some certain part of you," Cruz says. "But because I'm screaming most of the time some people are just instantly turned off by that."

In addition to Cruz's abrasive throat aerobics (most of which are decipherable), The Esoteric's sound is distinguished by the twin guitar riffs of Eric Graves and Cory White (who also plays for Reggie and the Full Effect) and pinpoint rhythm blasts of drummer Marshall Kilpatric and bassist Anthony Diale.

Though the band's songwriting has maintained an abrasive edge throughout its development, White says The Esoteric's recent compositions have adopted a more structured and accessible sound -- such as actually having verses and choruses.

"For some reason I thought that regularly structured songs were weak," he says. "Now when I write songs I'm like, 'Why waste six bad ass parts on one song when I can take one part and expand on it?'"

But Graves is quick to point out that the band's sound is still a far cry from mainstream emo-core bands like Autumn to Ashes or Thursday, which are known for alternating betweens sections of sensitive singing and coarse screaming.

"A lot of people are still going to think that (our music is) a lot of noise and it hurts your ears," he says.

Coalescing
The Esoteric's evolution dates back to 1996, when Diale, White and friend Tony Sittingup formed a pop-punk band called The Jaycocks. A mutual friend turned them on to obscure metal bands like Spaz and Agents of Satan, spawning an interest in a bunch of 7-inch hardcore records that Graves describes as "totally intense but sounding like ass."

That interest in underground hardcore became a full-fledged obsession after a still-young incarnation of The Esoteric shared a bill with KC-hardcore kings Coalesce at The Outhouse in 1998. Inspired by Coalesce's performance, The Esoteric plunged head-on into metal, experimenting with the dissonant guitar style and odd-time signatures that characterized Coalesce's sound.

"If you want to go back to what changed all of our views about music it was Coalesce," Diale says.

Mutual admiration soon spawned a friendship between the two bands. They began sharing practice spaces, and in 2001 the reformed Coalesce (for whom White played second guitar) took The Esoteric on a six-week tour.

"Hearing Coalesce practice in the same space that we practiced in for so long was a really cool feeling,'" Graves says. "Like, 'Wow, this band that I thought was so untouchable ... now I'm friends with all of them and we're going on tour.'"

Much of the musical sophistication that characterizes The Esoteric's sound today can be traced back to drummer Adam Mitchell, who embarked on his first tour with the band at the ripe age of 17. Mitchell's technical prowess drove the band to new heights, allowing for a greater level of experimentation.

"All of a sudden he was playing our songs faster than we could play them and we were like, 'Whoa, we better step up,'" Graves recalls.

When the pressures of touring became too much for Mitchell, Cruz called on Kilpatric to fill the throne. The seasoned Kilpatric, a veteran drummer who had just parted with Relapse Records' Today is the Day, spent just seven days practicing with the band before heading out on a month-long tour.

"We were all worried that we'd have to break up ... and then I called Marshall and he was like 'I'm on my way,'" says Cruz, a friend of Kilpatric's since childhood. "We drove to Denver and picked him up and practiced every day for a week and went on this tour and it was totally awesome."

Ghost in the Machine
The Esoteric's strongest driving force, however, has never actually played with the band. Manager Dean Edington -- known as "Mean Dean the Metal Machine" during his stint hosting KJHK's metal show, Malicious Intent -- befriended the band when they performed at his birthday party at The Bottleneck. In the coming years, Edington became a dedicated advisor to the band, booking its tours and assembling a comprehensive discography if its many scattered recordings.

"Dean knows more about The Esoteric than we do," Diale says.

Edington, who moved to Pennsylvania in Jan. 2002 to do radio promotions for Relapse Records, says the band's ability to fuse technical thrash prowess with melody helps it out in a crowded playing field.

"Really The Esoteric is capable of doing both of those things seamlessly without it sounding really contrived or being like, 'OK, this is the mosh part and this is the melodic part,'" Edington says. "It's not like that. The mosh part is melodic. Even in the heaviest of their riffs there's something there to latch onto."

Edington says he hears something distinctly Kansas in The Esoteric's sound; something he also admires in other local favorites like Season to Risk, Molly McGuire and Coalesce.

"They were all bands that kind of fall into that category of really hard to classify," he says. "Are they a rock band? Are they a metal band? Are they an alternative band? ... They kind of defy being limited to a particular genre."

Edington is heading up the band's discussions with a number of "large powerhouse" independent heavy music labels who have offered to release The Esoteric's next full-length album (which the band is currently demoing at home). He expects a deal to fall into place within the next couple months and a record to be out this year.

"The most difficult thing has just been to get the band on the road consistently with larger and larger bands," he says. "I'm pretty confident that once there's some label support the band will be touring 10 months out of the year."

Metal Macs
The bands' show this Friday at The Bottleneck promises to be one of the most musically diverse shows of the year. Openers Mac Lethal and Kelpie will warm up the show with their decidedly non-metal brands of hip-hop and introspective indie rock, respectively.

Cruz, who speaks highly of both opening acts, says the diverse lineups allow The Esoteric to reach out to unsuspecting audiences.

"They'll be hella kids that aren't even there to see us, or maybe are slightly interested, and some will open up just because they see everybody else opening up to it," he says. "That is good because we're not bullshitting at all; we're giving off as much real energy as we can. So if they open up just a little bit and we're giving all we got then we actually might get to hit 'em in an honest way." 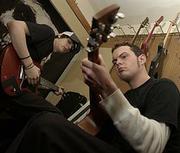 Lethal befriended the band after playing a Halloween show with Last Caress, a Misfits cover band that features all of The Esoteric sans White. The vitriolic MC, who names Tool and Metallica as two of his favorite bands, kept in touch with Cruz in hopes of possibly getting him to do a guest spot on his upcoming album.

Lethal says he was excited to get the call to open the show.

"I can promise you there's gonna be fans at the show that aren't gonna like what I'm doing," he says. "I'm going to try to cater to their crowd ... I imagine I'm going to have to bring some pretty high energy stuff and maybe try to tell fun, witty jokes and insult the president and talk a bunch of really dirty and violent shit to get the crowd going."

Cruz and White point to a resurgence of interest in metal among discerning music fans as one reason the band is able to play successful shows with other types of bands.

"It's kind of fashionable or something," Cruz says. "Hella indie rock kids and people that you would never think are into metal. They talk about it now and it's really in because they never listened to it before and it's this really new thing."

White adds: "It's like The Darkness. The reason that The Darkness is so popular right now is because kids have this weird thing where it's cool to be like (mimics falsetto rock scream), when five, ten years ago that would have been shunned."