I-Ninja was another humor-based action title added to the fray to inspire the "neenja" in all of us. The feeling you're left with is unfortunately stale.

Platform jumping/dodging/shooting was hard to miss this holiday season with so many titles vying for your $40-50. I-Ninja was another humor-based action title added to the fray to inspire the "neenja" in all of us. 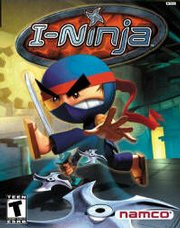 Namco's entry wasn't received with a lot of fanfare, much like kill.switch. But unlike switch, I-Ninja's gameplay did nothing new to separate it from the convoluted action genre at the end of 2003.

You are a mini ninja dude who touched a mysterious item, went nuts and killed your master. Now your ghostly master still decides to guide you on a quest to rid the world of the Master O-Dor. Aside from normal sword combat, you can run on walls, man turrets and break your fall by gliding through the air with a sword-helicopter move. You move from level to level, usually searching out a ball or other rolling device and in the fashion of Super Monkey Ball, roll your way on a different path to get back to yet another goal. Rolling this ball can be a chore simply because new areas sport different camera angles. Not only that, but the computer controls you for a split second not letting you know when you have total control. This may not sound like an issue, but there is little room for error when trying to navigate the ball on narrow bridges and passages of peril. Making up for this is an unlimited life scenario. If you fall during ball movement, you simply are restarted a few screens back.

After completing several levels, you get a new belt, unlocking more levels. This process repeats. There are diversions such as manning a huge robot and boxing an enemy robot and defending the walls from oncoming boats and aircraft. Neither of these provides any sort of challenge other than muddling through the clunky controls and repetitive gameplay.

The graphics are colorful and angular with traces of Japanese mockery. They're fun and functional, light and unspectacular. The voice acting is great, but the jokes are hit and miss, especially the ones you've heard 100 times.

Outside of these elements are basic hack and slash structures and mindless light-hearted enemies to weed through on your way to the next objective. It can prove amusing, but it shouldn't claim your $40 by any stretch.