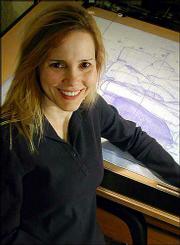 "He takes us on fantastical adventures through a slightly askew world," Dawn Brown says of filmmaker Tim Burton.

Brown should know, because she helped to design part of that askew world displayed in "Big Fish," Burton's whimsical effort which is released today nationwide.

The 1991 Kansas University graduate has established a career as a set designer in Los Angeles during the past eight years, working on such high-profile pictures as "Ocean's Eleven," "A.I. Artificial Intelligence" and "Charlie's Angels."

With "Big Fish," Brown reunited with Burton, with whom she had previously teamed on the 2001 remake of "Planet of the Apes." The current project offered her the chance to apply her talents to a film rife with atmosphere. The dazzling sets ranged from lavish Southern Gothic estates to fairy-tale locales of giants and witches.

"The art department plays a much stronger role in developing a story like this," she says. "One of our biggest hurdles was the massive quantity of sets we had to prepare. Because we're following the Edward Bloom character through his entire lifetime, we had to create a consistent and believable universe which spans from the 1930s to present day. Many sets are on screen for only a few seconds, but there was such a tremendous effort behind each and every one."

Specifically, Brown's job involved conceptualizing and drawing the plans for the construction of the sets (her degree at KU was in illustration/graphic design), which are built from scratch or modified from existing locations. Although she worked on almost every one in some capacity, her "two big babies" were the exteriors of the Bloom house and Karl the Giant's cave.

"I heard the fake rocks were very popular with the locals," she jokes about the latter. "(They) ran off with about half of the fake cave rocks the night before it was supposed to shoot. Tim Burton personally redressed the site with extra animal skulls and bones."

Brown spent August 2002 through January 2003 in Alabama, where the majority of the movie takes place -- a fairly unusual location for a big-budget production.

"We experienced such amazing extremes in the weather; the climate is a lot like Kansas, actually," she recalls. "I hate to say this, but after a decade of living in Southern California, it's easy to forget about things like chiggers and humidity and poison oak."

A native of Prairie Village and a 1987 graduate of Shawnee Mission East, Brown counts 11 feature films to her credit, beginning in 1995 with Robert Altman's "Kansas City."

In addition to her cinematic resume, Brown is a well-respected comic book creator. She is best known for her Image Comics series "Little Red Hot," about a sexy female bounty hunter whose otherworldly missions involve tracking down God and Satan. And she has put her distinctive stamp on the enduring fanged character Vampirella. (Go to www.dawnbrown.net for examples of her endeavors.)

Brown is currently composing a new comic book, which she hopes to publish later this year.

"It's a crime-fantasy inspired by the works of Edgar Allan Poe," she explains.

Brown typically alternates months creating her own comic book with months engaged on someone else's film project. Case in point, she just wrapped production on Joel and Ethan Coen's remake of the 1955 comedy "The Ladykillers," which stars Tom Hanks. Although the film takes place in Mississippi, the principal photography was shot on the Universal Studios backlot in L.A.

No Southern-style poison oak this time around for Brown.

"I LOVED working with the Coen brothers," she says of the duo responsible for such quirky fare as "O Brother, Where Art Thou?" "They are very down to earth and were involved with the art department more than I would have expected."

While Brown's career has presented her the opportunity to collaborate with some of the biggest filmmakers in Hollywood, that relationship doesn't extend to the stars in front of the camera.

"I don't interact with the actors at all; I rarely ever see them," she reveals. "Since the art department has to have the sets prepared before shooting starts, I'm usually finished with my job just as the actors are showing up."