The fanciful director has made a career crafting fables of larger-than-life misfits who try to adjust to a restrictive society -- whether it's the shears-limbed hero in "Edward Scissorhands," the quixotic filmmaker in "Ed Wood" or even the Halloween honcho who takes over Santa's gig in "The Nightmare Before Christmas."

Maybe none of Burton's characters has ever been more larger-than-life than Edward Bloom, the heart of "Big Fish." Played in his youth by Ewan McGregor and later by Albert Finney, the jaunty Southerner has lived through adventures that would fit right in with Paul Bunyan and Pecos Bill ... or at least that's what he claims.

We first meet Ed late in life during a montage of different moments when he is telling the same story about a catfish that swallowed his wedding ring. While his various audiences and wife Sandra (Jessica Lange) find the tale charming, his son Will (Billy Crudup) has grown resentful of these whoppers. This has caused enough friction in the pair's relationship that the men haven't spoken to each other in three years.

Director Tim Burton ("Ed Wood") returns to form with a vivid fable of a son (Billy Crudup) trying to reconcile with his larger-than-life father (Albert Finney). Using flashbacks to illustrate the many whoppers spun by this storytelling dad, Burton shows command of both the brassy visuals and the resonant paternal themes.

When it is revealed that Ed is dying, Will and his fiancee, Josephine (Marion Cotillard), return to the Blooms' hometown in Alabama to try and find some closure. While there, Ed recounts his far-fetched life story for the couple, and they must decide whether these memories of giants, witches, bank robbers, ghost towns and war-time espionage have any truth to them.

The strikingly vivid "Big Fish" is really the story of two journeys. One is the literal and/or mythological quest that Ed embarks on in his youth, which starts with leaving his small town for parts unknown and eventually courting Sandra (played in flashback by Alison Lohman). The other is that of Will's present-day investigation into who his father really is.

"We were like strangers who knew each other very well," Will narrates.

That the journeys intertwine so well without one-upping each other is a credit to Burton's deft handling of both the zany, radiant visuals (such as the forced perspective of the giant played by Matthew McGrory) and the more simplified conversational scenes. This is a film that nails the pictorial details of whatever environment or era into which the story intrudes. 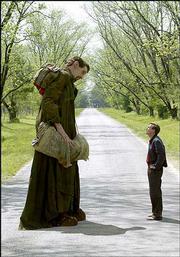 There is much to praise in the casting of "Big Fish." It's already kind of impressive how much McGregor and Finney resemble each other. Ditto for Lohman and Lange. Characters don't necessarily have to be physically identical to achieve credibility. But often they're so off base that they can take the viewer right out of the movie. (See the siblings in "Cheaper by the Dozen," who look no more genetically linked than any 12 random people waiting in line at The Gap.)

Finney particularly resonates as a magnetic man who has capitalized on his mouth for so long that he's incapable of speaking without adding a dab of embellishment. Expect an Oscar nomination for the 67-year-old veteran in the Best Supporting Actor category.

Equally impressive is Crudup ("Almost Famous"), who takes what could be a potentially whiny character -- he plays a reporter, after all -- and turns him into a concrete individual who helps to ground the movie. This part could be such a throwaway in comparison to the flashier roles in the film. Crudup brings something extra to the table.

"Big Fish" flounders a bit in its middle portions when it becomes distracted by a relationship between Ed and Jenny (Helena Bonham Carter), a mysterious woman from the past who tempts his fidelity. There's little sense of what her character adds to the overall picture, and the fact that so much time is devoted to this rather bland section makes it that much more vexing.

(One explanation for this misstep is that Burton and Carter have been dating since they met on his remake of "Planet of the Apes." Presumably, sweethearts don't like to be left on the cutting-room floor.)

Fortunately, this adaptation of the Daniel Wallace novel recovers with a finale that is emotionally on-target. This peaks with an uplifting father-son moment of bonding that punches home the movie's theme about the power of generational storytelling.

There may be a question as to whether Ed and Will arrive at the same definition of reality during this denouement. Yet there is little argument that Burton delivers the cinematic truth in "Big Fish."