The concept is unproven, even with the NFL Blitzes of the world. So how does it fare?

Style over substance. This is the phrase representative of an ongoing battle between the hardcore and casual gamer and is the usual difference between EA Big and EA Sports. Even though NFL Street's "It's all about style" mantra is prevalent, it does go deeper than you would expect. But is it still fun? 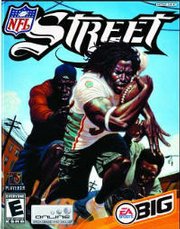 Like NBA Street, you pick your favorite players from your selected team, or players that would complement each other to form your team. Here you have seven instead of the normal eleven. In a pick up game, you take turns selecting from a random 40 of the 300 included NFL players (even legends like "Refrigerator" Perry), much like a real pick up game. In the challenge mode, you can create your own team (with many aesthetic customizations), bulldozing your way through over 200 different challenges.

The players play on both sides of the ball and can be interchangeable in positions. Ray Lewis as quarterback, say? No problem! There are no PAT kicks or field goals; you must get the ball in the end zone. For extra points you can run it in for one or pass it in for two.

The "Gamebreaker" feature from NBA Street shows up here and postludes the focal point of the game: style points. While you are making your easy, and I mean easy, way down the field with your simplified backyard playbooks, pressing the style button sometimes in combination with the right analog stick performs certain style moves. Link these with normal jukes and hops for more points. Once your Gamebreaker meter is full, activating it keeps your offense or defense in the zone for an entire possession, almost always resulting in an easy touchdown or turnover for touchdown, making the style moves even more gyrating and "interesting" on the way to the goal line. And it is this instance where my skepticism was proven correct.

The cockiness of the styles and celebrations on the football field are simply not as interesting as stylized dunks on the basketball court. Similarly dunk contests are popular and televised, whereas when was the last time thousands gathered to watch an NFL contest of stylized juking, jumping and celebrating? Exactly. EA Big undertook a major challenge. NBA Street capitalized on the fascination with the "dipsee-doo-dunkaroo." NFL Street capitalizes on nothing but an idea and occasional end zone cell phone call. Not that the game would be bad, but it would be much harder to prove interesting. However, what EA Big has pulled off is definitely beyond what I expected, indeed, but the aforementioned inherent flaw in its concept is readily apparent.

There are eight different selectable fields of play including parks, a beach, streets and others. Some environments are interactive, like slamming opponents into walls. Some fields are larger than others and have softer surfaces, no, not like grass, but like sand and mud. One may have to slightly use different strategies to get the ball down the field based on the environment, but really, the game wants to catch the ball and break open in wide space to rack up your style points. So you can never use the word "strategy" too lightly in this well-developed arcade-fest.

The character models are truly brilliant. The helmets are off and instead of pure realism, we have a mixture of gaunt and artistic body models with recognizable faces. This is easily the most refreshing aspect of the game. It's easy on the eyes and a joy to watch as the animations are solid. EA Trax provides another solid round of rock and hip-hop ranging from not-so-well-known to more major acts like Korn.

Xbox has the benefit of customizable soundtracks and PS2 has the online benefit. But other than that you are safe buying it for your favorite console.

NFL Street can be fun and is a very admirable attempt at a lesser thought out and unproven concept. Kudos to EA for trying, but, aside from the art style, this could've been better suited to an extra mode on Madden 2005.