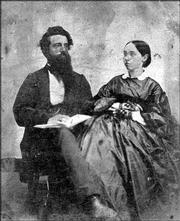 Charles Leonhardt, shown here with his wife Esther, fought during the Bleeding Kansas era alongside Gen. James Lane and other abolitionists in a secret anti-slavery society known as the Danites. Richmond author Todd Mildfelt chronicles Leonhardt's life and the workings of the group in his new book, "The Secret Danites: Kansas' First Jayhawkers."

After nightfall, a company of Lawrence free-staters 30 strong crept on cat's paws toward an encampment south of the city, where 22 Missouri "highwaymen and horse-thieves" whose captain had committed "outrages" on three free-state mothers were conversing by firelight.

The retaliation-bent platoon split in two and surrounded the unsuspecting marauders. By the time the targets heard rustles in the underbrush, it was too late: The free-staters mowed them down with rifle fire.

Then they quietly marched back to Lawrence.

At least that's the account of the 1856 massacre given in an 1859 book by James Redpath. The free-state newspaper writer left blanks where the names of the massacre's leader and the ruffian band should have been. But in 1900, Richard Hinton, who claimed to have been one of the executioners, went to the Kansas State Historical Society in Topeka and filled in the blanks, naming Charles Leonhardt as the leader of the Lawrence men.

No one's sure if the massacre really took place.

Even Todd Mildfelt, a longtime Kansas history teacher, was taken by surprise when he read a Franklin County Historical Society pamphlet that mentioned an alleged massacre site between Pomona and Ottawa.

"Here I've taught Kansas history all these years, and I wasn't really familiar with it," says Mildfelt, a special education teacher who lives in Richmond. "As I tried to discover whether this massacre really happened, that's when I ran into this man's (Leonhardt's) manuscripts in Topeka. He was actually accused of leading it."

And the surprises kept coming.

As Mildfelt dug deeper into Leonhardt's notes, drafts and manuscripts on deposit at the state historical society, he realized the long-dead free-stater's writings detailed the workings of an underground anti-slavery group that pre-dated the Civil War-era Jayhawkers in Kansas' Territorial period.

They called themselves the Danites, and Leonhardt counted himself a member of the group, led by Gen. James Lane, a notorious abolitionist. After discovering that Leonhardt had completed a manuscript about Kansas' "unwritten history" that he was never able to publish, Mildfelt decided to tell the clandestine history himself.

"It was sad to me that he (Leonhardt) never was able to publish his book," Mildfelt says. "My driving impetus was this is a story that deserves to be told, and I didn't care if I had to put up my own money to do it."

Leonhardt, an emigrant from Prussian Poland, lived in Plymouth, Mass., for three years before moving to Kansas territory in March 1857 -- the thick of the Bleeding Kansas period. Two years before, Missourians had crossed the border, stuffed ballot boxes and helped elect a Territorial Legislature that predominantly supported their cause.

Not long after Leonhardt arrived in Lawrence, he met Lane, who personally inducted him into a secret society called the Danites, which had been formed in 1855 to protect free-state settlers and to rid Kansas of its pro-slavery government.

The group borrowed its name from the Mormon Danites, but Mildfelt discovered the word originally occurred in the Bible and means, literally, the son of Dan. Based on Scripture, a Danite is one who is "good with weapons and sent on a mission to take new lands," Mildfelt writes.

The Lawrence Danites met at the Masonic Hall and had a grand master, priests and other levels of degrees, a secret grip and signs, its own secret cipher and a secret oath, Mildfelt says. And though the Danites originally formed as a defense group, Leonhardt and others -- including James Montgomery and the Rev. John Stewart -- became impatient with inaction by Lane and began conducting raids on known pro-slavery households throughout Kansas Territory, driving the guilty parties into Missouri or assassinating them. Leonhardt's writings even tell the story of how he and fellow Danites once hung a known slave hunter.

"No organized group during the Bleeding Kansas era, other than John Brown's, had attempted to stay in the field on a continual mission of harassment, and as this group did exactly that, they set the precedent that followed and became the Jayhawkers in late 1858," Mildfelt writes.

'He who loves liberty'

Despite performing dangerous actions on behalf of the free-state cause that might be considered heroic by modern sentiments, the Danites in the decades directly following the territorial period often were lumped together with the Jayhawkers -- hardly a compliment at the time.

"For some people in and around Lawrence, it meant you were basically just a lawless hoodlum out there raising havoc, and in a lot of cases you were pillaging. You were using the cover of being a free-state person to cover up your pillaging," Mildfelt says.

Leonhardt disputed the association later in his life and seemed genuinely hurt that the work he and his colleagues performed on behalf of the free-state cause was dismissed.

He issued this question to critics and those who, 20 years after Bleeding Kansas, were recounting history in articles and books: "Will these illpaid but overzealous inkslingers never comprehend the great truth that he who loves liberty thinks of himself last?"

Leonhardt moved to Cincinnati in 1859 to attend law school. He graduated in 1860 and returned to Kansas, where he went on an Underground Railroad trip with former Danite friend Rev. Stewart and transported at least 13 freed slaves from Lawrence to the Quaker communities of Springdale and West Branch, Iowa.

There he married an Underground Railroad station manager's daughter named Esther in 1861. He served a few years with a New York regiment in the Union Army but then became ill.

He returned to Kansas with his wife and five children in 1870, settling on a farm in Louisville. He worked off and on for a decade on a manuscript detailing the underground battle for liberty waged by the Danites, but he never managed to get it published. He died in 1884 and is buried with military honors in Paola. The manuscript has never been found.

Mildfelt remains puzzled why no one has written more about Leonhardt and the Danites and why his is the first book to cover the topic in any great depth.

"I can say that it is a topic that hasn't been treated very much," says Virgil Dean, historian at the Kansas State Historical Society, who admits he's only heard passing reference to the Danites and Leonhardt but knows nothing about them.

Throughout his research, Mildfelt has been in touch with descendants of Leonhardt, who have had mixed feelings about their ancestor's actions. Mildfelt says it's been hard to tell them their family member shot a man or hung a slave hunter.

"I told them to try to put themselves back 150 years ago," Mildfelt says. "I think we owe it to our ancestors to try and judge them in their own time's standard. I think for a lot of these men, the bottom line was they're getting attacked and harassed by pro-slavery forces, so they're feeling why don't we do the same thing back?"