In praise of bamboo

Shawnee — There's a moving love story in the 18th-century Chinese epic "Dream of the Red Chamber" about a young man who loses his love interest to a tragic early death.

Shawnee resident Zhang Li, whose English name is Lily Taylor, grew up in Tienshui, China, and has known the tale as long as she can remember.

Lily Taylor, also known as Zhang Li, is a Chinese-born artist and dancer who creates a bamboo painting during a dance she choreographed called "Praise of Bamboo." She's pictured explaining the painting after a performance at her Shawnee home.

"It's a very famous story," says Taylor, who moved to Kansas in 2000 with her husband, Jim.

Though Taylor's formal artistic training is in traditional Chinese dance, she taught herself to paint in 1987. Then, 10 years ago, she set out to combine her love of dance with her passion for painting. She drew from the "Red Chamber" love story to create "Praise of Bamboo," a seven-minute performance during which she dances the role of the grieving man and swaps out poetry, which wouldn't be visible to an audience, for a painting that she creates during the dance.

Her subject of choice is bamboo.

"In China, we call it peaceful. They (bamboo stalks) have good fortune. They're very strong. Outside it's dry, but inside it's still very strong," says the 46-year-old Taylor, who sees characteristics of herself in the plant. "Even though I'm getting old, my heart is still strong, not weak."

The process is mesmerizing. Practicing in her modest basement studio on a recent morning, Taylor, cloaked in white silk pants, a billowing tunic with clouds painted on the chest and a golden headdress, alternates between long, fluid motions and abrupt spins and swirls.

At intervals, she approaches a white canvas poised on an easel and blocks in bamboo stocks, later adding clusters of leaves.

Taylor finds the combination of movement through space and on paper satisfying.

"It's kind of an extension of my art," she says.

It's also a transition of sorts. Taylor started painting because she saw other dancers at her Beijing company beginning to retire and she wanted to have an outlet for creative expression when she could no longer dance.

Her desire to learn became even more ardent after a serious fall during a performance injured her back. 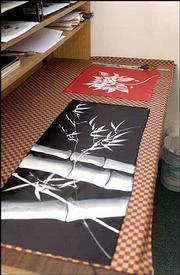 Artist and dancer Lily Taylor creates paintings like these on silk, satin and rice paper in her Shawnee home studio when she's not traveling to art fairs or performing.

"I went to the hospital and lay down on the bed and watched the moon just outside the window," she recalls. "I said, 'I need more confidence in my future. I need to do something.'"

At first, she copied images exactly as she saw them in books. But eventually Taylor developed her own style. Now her basement studio is constantly full of paintings of bamboo, koi, tigers, horses and flowers on silk, satin and rice paper. She attends a handful of art festivals in the region each year -- including Lawrence's annual Art in the Park -- to sell her work.

"Probably a lot of people know me (in Lawrence)," she says.

She doesn't dance as much anymore, though she has given a few performances for Families Blessed with the World's Children, a group of people in the Kansas City area who have adopted children from China and want to teach them about their culture.

Taylor moved to the United States in 1996. She thought her stay would be temporary, teaching at a Chinese dance company in Seattle, but she met her husband there and changed her plans. The couple moved to Shawnee to escape Seattle's soggy weather, which aggravated Taylor's arthritis.

Rainy weather actually helped propel Taylor's dance career. She recounts how a one-day visit by a friend of her parents turned into a nearly weeklong stay when a downpour made the roads impassable for several days. Taylor was 12.

Her father, who was a general in the Chinese military, and her mother, a military nurse, explained to their friend that their daughter was "crazy about dance."

Lily Taylor, also known as Zhang Li, is a Chinese-born artist and dancer who creates a bamboo painting during the course of a dance performance about a young man who loses his love interest to a tragic early death. She'll perform Saturday in Lawrence.

He offered to take Taylor to the Guangzhou state dance company for an audition, and she ended up performing and touring with the company for 15 years.

She'd never had any training before that, but she "loved to watch movies and imitate movie stars."

She eventually became a member of the Chinese Dancers Assn. and the Beijing Calligraphy and Fine Arts Assn. Her paintings hang in both public and private collections around the globe, including the Soviet State Gallery in Moscow, the Presidential Gallery in Egypt and the private collections of the rulers of Kuwait and Malaysia.

Though she sometimes misses her native country, she stays connected through custom, clothing, art and language. At the same time, she's doing her best to perfect her English-speaking skills. She had a tutor in Seattle, and her husband helps her a great deal. She also learns everyday from reading street signs when she goes on walks. At art fairs, she keeps an English dictionary at her booth to study during down times.

She has learned by selling paintings to Americans that they often love Chinese aesthetics as much as she does.

"A lot of people decorate Oriental in their house," she says. "I understand their love for my culture. I'm so proud."