In "Nurse Jane Goes to Hawaii," one of Harlequin Romance writer Vivien Bliss's claims to fame is that she can make exquisite cheese dreams.

At one point during the Allan Stratton farce, which opens Friday at the Lawrence Community Theatre, Vivien decides to whip up her specialty, and cast members soon notice that "something's burning" in the kitchen.

Jane Henry, as Doris Chisholm, left, and Aisha Wolgamott, as Vivien Bliss, rehearse a scene in "Nurse Jane Goes to Hawaii." The farce is slated to open Friday, as originally scheduled, despite a recent fire at Lawrence Community Theatre, 1501 N.H.

"Which adds a whole new meaning now," says Jennifer Brown, who plays a nosy reporter in the show.

That's because three weeks ago, the basement costume shop at the theater went up in flames, destroying two-thirds of the theater's vintage outfits and coating the entire building in a thin layer of smoke.

Brown's the one who noticed the orange flicker in the basement window as the cast waited to get into the building before its Dec. 29 rehearsal. Fortunately, emergency personnel responded quickly and the fire didn't spread.

And despite the scare, the cast forged ahead, rehearsing that very evening at a cast member's home.

"We did so purposefully," says "Nurse Jane" director Charles Whitman. "A fire, for any organization in their principal building, is extraordinarily stressful. But we thought the spirit as well as the word of 'the show must go on' was served."

So, after a few nights in the basement of the community building and one at Meadowbrook apartments, the cast returned to the theater for rehearsals and will open "Nurse Jane" as originally scheduled.

The popular Canadian farce should bring some much-needed humor to the theater, which has seen just about as much foot traffic from volunteers and technicians cleaning soot-coated books, computers, lights and walls as from actors, set builders and directors.

The play revolves around Vivien (Aisha Wolgamott), a virginal writer who decides to embark on her first love affair and arranges to spend a romantic weekend with a married schoolteacher, Edgar Chisolm (Charles Decedue). A whacky chain of events ensues, complete with confused identities, disguises, long-lost relatives, ambushes, chases and general mayhem.

With tape recorder in hand, Vivien breathlessly dictates each slamming door and plot twist, tying the action into the pages of her novel and the life of its heroine, Nurse Jane.

Also interwoven in the action are Doris Chisholm, an advice columnist (Jane Henry); a nosy reporter (Brown); a doctor in pantyhose (Dan Spurgin); an orphan with a cake (Yossarian Cardin Ritter); and Helga, the evil Russian physicist (Jill Sibley). 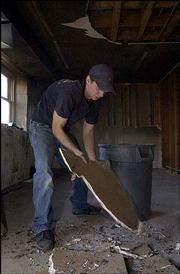 Shane Thompson, Topeka, an employee from All Pro Service, cleans up the Lawrence Community Theatre's now-empty basement costume shop, where a Dec. 29 fire destroyed two-thirds of the theater's vintage costumes. Volunteers and specialists are preparing the theater in time to open "Nurse Jane Goes to Hawaii" on Friday

The play "is very popular in Canada," Whitman notes. "Our subscribers enjoy farce and this kind of theatrical experience."

A few silver linings have emerged from the theater's minor disaster.

Just about every surface in the theater got a brand new coat of paint. Volunteers have rallied to help recover costumes and clean the building.

"We were so fortunate that it was over the holidays because so many people had extra time off," says Mary Doveton, director of the theater. "We had lots of people who would ordinarily be teaching or in class or working, and they came and shared their days off with us."

Metal hangers got hot and scorched garment sleeves, and plastic hangers simply melted into costumes. Lots of clothes went straight into a Dumpster, and 60 trash bags full are at the cleaners.

Still, the cast and crew are confident "Nurse Jane" will be all the better for the adversity.

"I don't think, despite the setbacks, this will be any less of a show," Wolgamott says.

"It's probably made us a closer cast because of the adversity," Henry adds.

She pauses, then imagines a headline that encapsulates the weeks leading up to opening night: