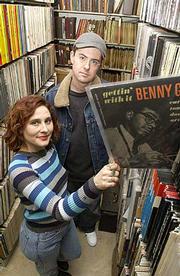 Roberta Schwartz,manager, left, and Josh Powers, archivist, are concerned about the Archive of Recorded Sound at KU. The archive funded with private funds that have dried up. The archive includes many works from Edison cylinders and priceless opera recordings to a large collection of rare Jazz albums.

For the past two years, Josh Powers has been living every hip-hop producer's dream.

As the archivist for the Richard F. Wright jazz archive at Kansas University, Powers has unlimited access to thousands of the most rare and valuable jazz recordings in existence. From legends like Charlie Parker and Duke Ellington to lesser-known greats such as Red Nichols and Clifford Jordan, the archive is a jazz-lover's El Dorado; a wonderland of infinite discovery stocked with 33- and 78-rpm gold.

For Powers, a local producer who recently released a record under the name "SceneboosterSoundSystem," working at the archive comes with a particularly enticing benefit: being able to sample the records to use in his beats.

"Having access to this collection puts me on par with millionaire record producers in New York City," said Powers, who spends 25 hours a week in the jazz archive cataloguing its 20,000-plus recordings. "A huge portion of (my record) came out of this archive."

Any day now, Powers will lose his job. His boss -- Roberta Freund Schwartz -- will tell him that he will no longer be receiving a paycheck. He will still be welcome to come and use the archive, but he will no longer get paid to look after it.

"Unfortunately, our endowment money has run out," said Schwartz, an assistant professor of historical musicology who has managed the archive since its namesake -- KU jazz history professor Wright -- passed away in 1999. "At this point we're pretty much running on goodwill."

Barring a last-minute donation from a jazz-loving Rockefeller, KU's Archive of Recorded Sound -- which also includes the James Seaver Opera Archive -- will be hibernating for a while. The $54,000 donated by KU alumni Paul and Maurine Adams in 1998 to keep the archive running is all but gone, having been spent on shelving, rice-paper lined polysleeves, listening equipment and archivists' salaries. Without money to pay a full-time staff member, the archive will be available only by appointment. All efforts to build an online database of its contents will be put on hold, leaving 95 percent of the collection's holdings uncatalogued (according to Schwartz's estimate).

"It's very, very hard because I know what a great treasure this is," Schwartz said. "To generalize, we are now looking for funds."

All that jazz
Though the archive is housed in KU's Department of Music and Dance, it has never actually received funding from the music school, instead relying on independent donations and grants.

The collection traces its history back to 1979, when the KU Libraries purchased Seaver's opera collection and a complete discography of jazz artist Red Nichols. With the help of a grant from the National Endowment for the Humanities, librarian Ellen Johnson oversaw the cataloguing and growth of the collection from 1983 to 1988. When she retired, the libraries decided not to hire a new custodian for the collection, instead transferring responsibility to the music and dance department.

Roberta Freund Schwartz, assistant professor of historical musicology and manager of KU's Archive of Recorded Sound, shelves a priceless opera recording. Inset at right shows a closeup of one of the unusual albums in the collection that includes detailed artwork on the disc itself.

"It would probably be catalogued by now (had it stayed under the control of the libraries)," Schwartz said.

Wright, who was also known as the host of KANU's "The Jazz Scene," revived interest in the orphaned archive in the early '90s when he donated to it his personal jazz collection of about 15,000 records. Wright also moved his office into the archive and began assisting students with independent study projects and accommodating visits from scholars across the country who came to do research.

It was during this time that the collection experienced its most rapid growth, as Wright's friends and colleagues (such as Chuck Berg and Howard Rittmaster) donated thousands more records.

Shortly after Wright's death in 1999, one of his former students, Brandon Burke, convinced the music department to employ him as a full-time archivist and caretaker of the collection. When Burke began the monumental task of cataloguing the collection, he confronted an "abandoned garage sale" of boxes upon boxes of unorganized records.

"Dick was an amazing historian and really loved spreading the word about his favorite style of music," Burke said. "He was not, however, an archivist, and he was not a librarian."

Burke spearheaded the effort to build an online database of the archive's holdings; a tool that is essential for accommodating graduate students and scholars from across the country. He also worked to bolster the national reputation of the archive by making connections with other archives across the country and National Public Radio. 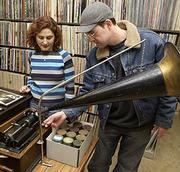 Burke, who now works as an engineer at an audio digitization lab at the University of Texas, said he was continually disappointed by a lack of student interest in the archive. During his two years working in the archive, Burke said he only remembers one student who came in to request recordings of pieces he wanted to learn.

"It makes me wonder whether these kids even like the music they're playing," he said. "I mean, how in the world would you not be intrigued to just go in there and look around?"

Jazz out of bounds
One obstacle to attracting student interest in the archive is copyright law, which prevents archivists from making copies of the recordings for patrons to take home.

"Most archives are for scholarly research; they're not for recreational listening," said Deborah Gillaspie, curator of the Chicago Jazz Archive at the University of Chicago. "It's here to be preserved for the next 30 to 50 years, it's not here for someone to come in and say 'I want to listen to Miles Davis.'"

Students at KU have other options for listening to jazz, but none are as enticing as the Wright archive. The Thomas Gorton Music and Dance Library offers plenty of records from the Thelonius Monks and the Count Basies of the jazz world, but lacks the scope and breadth of the Wright archive.

"We deal with more of the rarities," Schwartz said. "Most of the archive's stuff may not have a wide enough appeal to be held in the main library, but it's just as just as important in a historical sense."

For example, students would have no problem finding Miles Davis' "Birth of the Cool" at the main library, but they'd have to come to the archive to find "Blue Moods," a rare recording with Charles Mingus on bass that sells for hundreds of dollars on eBay.

Dan Gailey, KU's director of jazz studies since 1990, says his students will be losing a valuable resource if the archive is not open to them on a regular basis.

"I think they would even use it more if it was better staffed," he said, adding that Powers could not assist with independent study projects since he was not a member of faculty. "When Dick was alive there were students up there all the time."

Gailey, who single-handedly runs the jazz program and teaches all of its classes, admitted that the archive was not high on the list of priorities in an already tight budget.

"Right now the reality of the situation is that if it was going to be state money (used to hire a full-time archivist) it would mean somebody else losing their job," he said. "So the only way that this is going to get fixed, at least in the near term, is either private money or an additional grant." 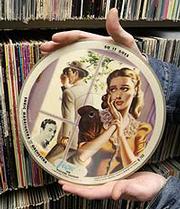 The Archive of Recorded Sound includes vogue albums, which have album art on the record itself.

Nobody's child
Even without a caretaker, the collection will at least stay intact with a few precautions, Burke said.

Schwartz said she is working on applying for another NEH grant, a long process which involves precise accounting of what the money would be used for.

"We may have to try for 10 years, but I'm going to be here," she said. "And these records aren't going anywhere, either."