People like playing God and/or living vicariously through movie and video game heroes. From time to time, there is a game that really hits home, involving the gamer too deeply into a gaming role. But none more than The Sims series. 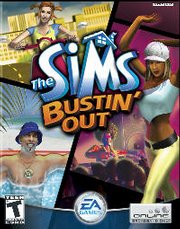 The Sims started as a PC app, letting us control and watch an actual life, including going to the bathroom, showering to socializing and getting a job. Seemed like a niche-based game at the time but soon blossomed into a craze that the Sim City series never could attain. Many expansions came out until it finally broke out on to consoles and did quite well.

Now we arrive at "Bustin' Out" on the consoles, providing a more seamless gameplay experience with more careers, items and interactions to experience. Nothing is incredibly groundbreaking, giving Bustin' Out a clear distinction of a $50 expansion pack.

You can play free, controlling tons of Sims to your heart's content, or you can play the objective's based mode, starting in your mom's house, fighting your way to the top of the food chain in one of the seven new careers including athlete or even a mad scientist. There are plenty of new animations and items to find, which may satiate the attention span of Sims patrons, but isn't enough to excite the casual onlooker.

The graphics are fine. It's a simulation game based on playing God. That's the bread and butter. So when there is no real soundtrack or super-flash to the graphic presentation, it is all forgivable. That being said, what is there is clean and the sound effects are done particularly well.

Bustin' Out is fun, just like the previous Sims. If you aren't a rabid fan, you won't find much to justify another $50, but it is well worth it if you haven't had the Sims experience yet. I just hope the next console incarnation doesn't seem like an overpriced expansion.