By By Greg Hurd 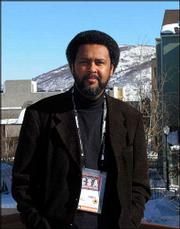 Kevin Willmott enjoys some brief time away from the frenzy of the Sundance Film Festival, perched outside the festival's headquarters in Park City, Utah.

Park City, Utah — For people in Park City, Utah, a town dedicated to the proposition that not all films are created equal, riding the crest of the insider "buzz" sonic wave during the Sundance Film Festival means being at the hottest spot at its brightest moment.

For many, that means being near celebrity.

Perhaps catching a peek at Brian "Kato" Kaelin at a lavish party honoring the Brazilian film "Carindiru." Or a fleeting glimpse of Ashton Kutcher, star of the Sundance film "The Butterfly Effect" and best known for television's "Punk'd" and "That '70s Show." Or sharing a taxi ride with Paris Hilton and Nicole Richie of television's "The Simple Life."

But for a few, if not ultimately for all, the moment means breaking through to the real, the true.

And it wasn't even about basketball.

For there at The Bistro, even the broadcast of the KU men's basketball team competing with the upstart Aggies of Texas A&M took a back seat to talk of that night's upcoming premiere of "CSA: The Confederate States of America."

The Bistro, with its cozy upstairs bar and local brews, offered a comfortable blend of Parisian ambiance and mountainside resort for the hosting of that evening's Kansas Film Commission reception. Waves of well-wishes broke over team-"CSA," and all present were fÃted by T-shirt and sunflower button-wielding commission members.

Celebrated were writer-director Kevin Willmott, producer Rick Cowan and the dozens of cast and crew who had made their way to Sundance in honor of the faux documentary about an America in which the South won the Civil War.

"Kansas was the only place I could have made this film," Willmott said.

Screen scene
But while buzz can be beneficial, it can sweep up everything in its path, including tickets.

Kevin Willmott, left, confers with fellow Lawrence filmmaker Tim DePaepe at the Sundance Film Festival. The pair represented just a few of the many Kansans who ventured to Park City, Utah, to support Willmott's "CSA: The Confederate States of America."

Since all showings of "CSA" were sold out, even Matt Jacobson, co-producer and cinematographer on the film, was without a ticket until the reception. Jacobson looked on the bright side, saying that the film's success would be decided by the audience saying "we love this or we hate this."

Willmott said the premiere was like "letting the cat out of the bag" in that what had been done in relative secrecy in Kansas was now about to be revealed on a world stage. His hope was that the screening would create a "storm of interest," and if that were to happen, "then we've done our job," he said.

Preparations were made, and at the appointed time, cast and crew began to arrive at Prospector Square for the screening.

The scene inside the venue was one of quiet anticipation as hundreds of "wait-line" patrons, many of whom had stood there for several hours, patiently anticipated a chance at an unclaimed ticket. There were 30. The usual Sundance screening at the venue averaged 100.

One was Jason Peters of Washington, D.C., who was there because he was excited to see a picture about "a very controversial subject."

In filed the several hundred fortunate enough to have tickets.

Inside they witnessed, in faux documentary form, an America in which slavery was still an everyday reality. They laughed uncomfortably for a time at the mock commercials for products harkening back to slavery and the re-touched historical film clips.

The repercussions
After the film, following an intense question-and-answer period with Willmott, the crowd dispersed, with many people deeply engaged in conversation about what they had seen.

Elvira Scott, of New York, said, "It was fictional, a mockumentary, but some of it was very real."

Patrick Rea, a Lawrence crew member on "CSA," said the "scary part" about "CSA" was that people "started accepting the commercials as if they were real."

Jeff Reid from Pennsylvania said the piece raised issues that he hadn't thought about "as a young black male." "I used to go to Sambo's restaurant as a youth, and I never connected that with the slave trade," he said.

Brian Brooks, a freelance journalist with indieWire, said "CSA" combined "elements of documentary and fiction." "He uses the untruths to get at a deeper truth, so that the contradiction is fascinating," Brooks said.

Melvin Van Peebles, father of blaxploitation films and director of "Sweet Sweetback's Baad Asssss Song," was getting below the surface when he claimed, "It really was what I had hoped to see when I started this years ago."

His son, Mario Van Peebles, at Sundance for the American premiere of his film about his father, "Baadasssss!" said the film was about the search for historical truth and the power of that truth to shape present actions. ("I think what Kevin is doing is putting a light on that," he added.)

Willmott interpreted the impact of his project, saying, "There will be people who love the film and people who hate the film. My job is to tell the truth."

"CSA" then is a search for the truth in order to reshape history and open the door to a new future.

Patrons wait for unclaimed tickets prior to the Sundance Film Festival premiere of "CSA: The Confederate States of America" inside the Prospector Square Theater.

Along with the impact the work will undoubtedly have on the career of Willmott, "CSA" may open a door for Kansas filmmaking as well.

Perhaps independent producer Scott Richardson, of Lawrence, summed that up best when he said that because of the "CSA" buzz, "It could be the beginning of a whole new thing for Kansas in the arts."