Is it a coincidence that this weekend's feature film releases are dominated by the stars of TV's "That '70s Show?"

If given the choice between doofus prankster Ashton Kutcher attempting to get in touch with his "serious side" in the thriller "The Butterfly Effect" or Topher Grace deftly mastering the role of acerbic charmer in "Win a Date With Tad Hamilton!," audiences might want to settle on the latter.

Grace is just one of many things right with this simple yet slightly subversive romantic comedy -- which actually takes two direct but good-natured shots at Kutcher. The movie boasts three excellent leading performances, as well as a gaggle of colorful supporting roles. Most importantly, it effectively keeps the balance between romance and comedy evenly distributed. The relationships never get short-changed for cheap laughs, nor do the jokes ever wane when the mushy stuff is cranked up.

Grace plays Pete, a manager of a Piggly Wiggly supermarket in Fraziers Bottom, W. Va. As the story begins, he is accompanying his two best friends/co-workers -- perky Rosalee (Kate Bosworth) and stout Cathy (Ginnifer Goodwin) -- to the theater. The girls want to see the latest Tad Hamilton (Josh Duhamel) tear-jerker, but Pete would rather just make fun of the film's dopey plot.

While Pete mulls over the right way to tell Rosalee that he's in love with her, she enters a contest to win a date with the movie star.

Back in Hollywood, Tad's needling manager and agent (Nathan Lane and Sean Hayes) have cooked up the scheme to help the box-office giant tame his increasingly bad-boy image.

"I am the boy next door if you happen to live in a very dysfunctional neighborhood," Tad says.

Of course, Rosalee wins and is whisked off to Tinseltown. (The filmmakers waste no more than 10 minutes getting to this point in the story.) But then the interesting dynamic begins, involving the inevitable romantic triangle and the more internal themes of what a down-to-earth girl like Rosalee can do for a movie idol desperately trying to sort out his real values.

Australian director Robert Luketic obviously learned from his "Legally Blonde" experience that the best way to give a light comedy some heft is by casting it well. It's no surprise that Grace proves himself a master of the sarcastic quip ("I will tear you to pieces with my bare hands ... or vicious rhetoric," he threatens his rival.) Yet Grace is really convincing when he lets his guard down in the emotional scenes.

The 21-year-old Bosworth, best known as the gritty surfer girl in "Blue Crush," plays a character almost completely different from her breakthrough effort. She manages to be convincingly sweet and affable, but never to the point where she comes off as a caricature.

Win A Date With Tad Hamilton ***

Three charming performances give some spunk to this triangular romantic comedy about a movie star (Josh Duhamel) a West Virginia gal (Kate Bosworth) and the guy who loves her (the ever-sarcastic Topher Grace). It admirably avoids a lot of the big city/small town stereotypes and concentrates on the congenial relationships.

Former soap star Duhamel certainly fits the bill as a generically handsome matinee idol. The best thing about how his character is conceived is that he is not a conventional good guy or bad guy; he's just a famous guy, and with that comes a whole alternative set of ethical rules.

There's always a tendency when Hollywood takes on these small town versus big city comedies to break it down to the most coarse stereotypes. (See the hideous "Sweet Home Alabama.") Victor Levin's "Tad" script portrays the L.A. types as the affected ones, and the West Virginia folks as, well, pretty normal.

However, some of these supporting players don't fit in quite so effortlessly into the easygoing plot. Kathryn Hahn plays a tattooed bartender who is as in love with Pete as he is with Rosalee. This implausible relationship smacks of contrivance.

And the usually dependable Gary Cole (the creepy boss in "Office Space") turns up as Rosalee's dad, who begins to have an obsession with all things box-office related once he discovers she's dating a movie star. Although this plot point often falls flat, it does provide one of the funniest insider sight gags when Cole appears wearing a "Project Greenlight" T-shirt.

In that HBO reality series, the producers ripped on the actor for turning down their film in order to shoot "Tad Hamilton!" 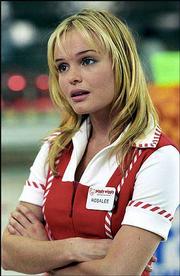