Illustration has soothing soups written all over it 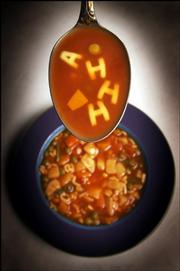 The assignment was to illustrate "comforting winter soups" for the newspaper's food page. The trick with this illustration was to try and blend the themes "comfort" and "soup" into one coherent conceptual image without it appearing vague and uninteresting.

Thanks to Campbell's Alphabet Soup, I was able to spell out a phrase that would make the theme more digestible. Get it? The word "ahhh" was perfect, I decided, since it conveys the idea that a mouth is open and also the sound when something is pleasing and comfortable.

The letters were placed in a spoon, and the spoon was held over the bowl of soup while the photo was shot in a studio. After the image had been captured, I burned-in the empty space in the image to make it more visually interesting.

-- "Behind the Lens" is an ongoing weekly series that features an image selected by the Journal-World photo staff that previously ran in the newspaper or online. Wondering how a certain picture was created? Nominate it for "Behind the Lens" by contacting chief photographer Mike Yoder at 832-7141 or myoder@ljworld.com.