Artists James Lipovac and Jessica Pignotti have the kind of eyes we might all be better off with.

They see in everyday scenes most people simply overlook -- clothes tossed haphazardly on a cabinet, trinkets peeking from household perches, a chicken thawing in the sink -- an unaffected beauty that rises to the level of art. 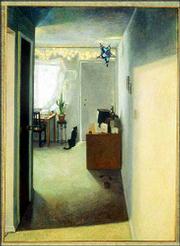 Their paintings might seem ultra ordinary at first glance, but spend some time with them and you start to notice subtleties, such as the pool of water forming on the floor and the warm light an overhead bulb casts on a plant in the kitchen sink in Lipovac's "Saturday Morning." Or the interplay of light and shadow and the sleek black cat waiting by the barely cracked front door that gives away the person standing just outside in Pignotti's "Returning Home."

Both paintings are part of "Intimate Interiors," a two-person exhibition opening Friday at Signs of Life Gallery, 722 Mass. The show will include some 24 paintings by the artists, friends who met while attending graduate school at Indiana University and now live in Wilmington, Del.

Gallery director James Schaefer hopes viewers connect with the paintings, which he describes as exploring "the life of everyday, of making meals and keeping the larder full, and what it means to live in a space and make it your own."

Winter seems the perfect time to make such connections, he says, because people spend so much time indoors, moving among objects that have become familiar to them.

"I always felt like most people don't have time to sit and look at those kinds of things and that it's kind of my job to do that for them and show it to them in paintings," Pignotti says. "I hope that really comes across, the significance of everyday life."

Lipovac and Pignotti discovered shortly after meeting that they shared an interest in everyday objects. They also agreed that their reverence for the ordinary seemed to be scarce in galleries.

"I guess what I feel is missing is sincerity and joyfulness for art," Lipovac says of contemporary work.

Though he and Pignotti both paint from life and concentrate on similar subject matter, their paintings are distinguishable.

"I almost don't feel like we've influenced each other's work as much as we just really have always been on the same page ever since we met," says Lipovac, who teaches printmaking and drawing at Delaware College of Art and Design in Wilmington. "Her work is a little bit more feminine. .. Her paintings are usually more intimate and smaller in scale and have less stuff."

Lipovac is more apt to include human figures interacting with interior spaces, while Pignotti concentrates mostly on still lifes. 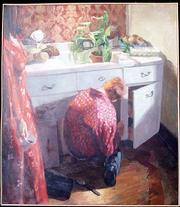 "Saturday Morning," a painting by Wilmington, Del., artist James Lipovac, will be part of "Intimate Interiors," a two-person exhibition opening Friday at Signs of Life Gallery, 722 Mass. Also in the show will be Jessica Pignotti of Wilmington.

Her cat finds its way into much of her work. And though people rarely appear, a human presence is palpable in the way books are stacked or light comes through a doorway, suggesting activity just out of sight.

Lipovac says his paintings begin with small moments, such as a spill on the floor that light strikes in an interesting way. Then he builds a situation around it from his imagination. But he doesn't expect viewers to key into any of the metaphors he sees in the objects.

"The thing that I want to be taken from the work is just the feeling of the moment or the air," he says.

Lipovac and Pignotti both grew up in the Midwest -- he in Des Moines, Iowa, and she in Chicago. Pignotti moved to Wilmington with Lipovac and his wife in May. She lives in a top-floor apartment at the Lipovac's home and is working part time while she searches for a teaching job.

In her spare time, Pignotti commits to canvas her observations of how seemingly mundane scenes can transcend the prosaic.

"In the past, I had felt like in order for art to be great, you needed to paint extraordinary things, otherworldly things," she says. "A few year ago I had an epiphany that everything I needed was right around me."