The tiny woman with a big voice has the formidable task of channeling the girl from Oz -- Judy Garland -- in the Broadway hit "The Boy From Oz," the frenzied musical recounting the life of Garland's protege, Australian entertainer Peter Allen. 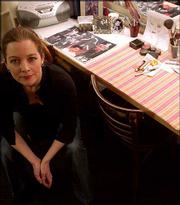 Actress Isabel Keating poses in her dressing room in New York's Imperial Theatre. At the back of her dressing table is a drawing that shows her how to apply makeup to look like Judy Garland for her role as Garland in the Broadway musical "The Boy From Oz."

Dolled up in crimson lipstick and warbling with the voice of a legend, Keating draws impressed gasps as she performs on stage with Hugh Jackman, who stars as Allen. Few would guess Keating is new to musicals and only recently perfected her Garlandesque "oh my."

"Initially, it was very intimidating to play someone who is that incredibly just-blow-your-mind amazing," Keating says one recent night before curtain rise at the Imperial Theatre.

"So I have to just go, 'Well, forget it, nobody could ever do that, nobody should even pretend to be able to do that,' and then try to approximate it and hopefully achieve something of an homage."

The homage extends to Keating's dressing room, where a pencil sketch of Garland hangs on the wall and a makeup guide shows her how to apply heavy eyeliner and fake eyelashes to make her wide blue eyes more Garland-like.

That praise must say something about Keating, whose performance was called "an eerie, astonishing impersonation" by Associated Press drama critic Michael Kuchwara and won similar accolades from other reviewers.

"Even at the table reading, there was just an essence about her that was so Judy Garland," says Stephanie J. Block, the actress who plays Garland's daughter, Liza Minnelli, about early rehearsals for the show. "When she opened her mouth and sang like she did, the whole cast was just freaked out."

"The Boy From Oz" depicts Allen's rise from small-town boy to headlining singer-songwriter. His act suddenly skyrockets when he's discovered by Garland in a Hong Kong nightclub and brought to America to be her opening act -- and eventually her daughter's first husband.

In hindsight, the role of Garland seems tailor-made for Keating, a 42-year-old Savannah, Ga., native who was told after early stints in summer stock that she reminded folks of a young Judy Garland.

"At that point, I just knew her from 'The Wizard of Oz,"' Keating says. "Now I see I should've been really floored and grateful and thankful."

She learned to belt like Garland in a production of "The Rise and Fall of Little Voice" in Washington, D.C., starring as a woman who speaks only through the songs of divas, including Garland. Then came a reading of "Judy's Scary Little Christmas," which eventually became a stage production in Los Angeles.

The casting director for "The Boy From Oz" saw that reading and invited Keating to audition years later -- a daunting task for an actress with no vocal training who was more accustomed to straight plays such as "Enchanted April," which provided her first Broadway role.

When she walked in to read for the "Oz" part, director Philip Wm. McKinley was immediately struck by her resemblance to Garland. But it was her "incredible vulnerability" that he says brought him to tears at her audition.

"She started to sing, and within 10 seconds I was mesmerized," he says. "She puts her entire self into it. At the end of the day, she's an actress who sings, and that's what makes her performance so startling."

That sounds a little like Garland, who Keating says "acted her songs."

"One of the quotes in the play is 'the audience demands blood.' Basically, Judy gave her life, her blood, to her audiences."

For an example of that kind of performance, Keating looks no further than Jackman, who is on stage for most of "The Boy From Oz," twirling, singing and shimmying as the over-the-top Allen.

"He generates such a whirlwind of energy that you can't help but get caught up in it. I keep going, 'How do you do this?' and he says, 'Ah, stop it, whatevah,"' she recounts, mimicking Jackman's Australian twang.

Mimicry comes easily to Keating, who learned to imitate accents as a child listening to her Moroccan mother and Southern American father. Fluent in several languages, she originally planned to be an interpreter before she "fell into" theater at the age of 24.

Her first paying job was at a children's theater in Savannah, and she moved from city to city before hitting her stride in Washington, where in 2000 she won the Helen Hayes Award for best actress in Tom Stoppard's "Indian Ink."

Now she's been embraced on Broadway -- there's a laminated "Here Comes Isabel" headline on her dressing room wall, taken from the like-named hurricane and presented to her by the young actor Mitchel David Federan, the high-energy lad who portrays Allen as a boy.

From Isabel's hurricane to Oz's tornado, sometimes it seems a force of nature is bringing the pieces into place for Keating.

"Sometimes life is so freaky," she says. "Maybe Judy's watching out."