Beverly Hills, Calif. — Hobbits ruled the Golden Globes on Sunday as "The Lord of the Rings: The Return of the King" won four trophies including best dramatic film.

"Lost in Translation," a story of two lonely Americans who find friendship in a Tokyo hotel, collected three awards, including best comedy film, best comedy actor for Bill Murray and best screenplay for Sofia Coppola, who wrote, produced and directed the film.

"I never realized that seven years on this movie would end up turning me into a Hobbit," Jackson said, referring to the shortish, big-footed magical characters in the J.R.R. Tolkien stories. "To all of the actors, our magical cast, you just gave so much to the movies and equally importantly you made it so much fun to work on."

And it was a melancholy moment for Sarah Jessica Parker, star of "Sex in the City," who took home a best actress in a comedy award and acknowledged the end of the hit show.

But movies gathered most of the attention as Sean Penn collected best movie drama actor for playing an emotionally ravaged father seeking revenge for his daughter's murder in "Mystic River," and Charlize Theron won the drama actress honor for "Monster," the story of a prostitute serial killer.

Theron thanked writer-director Patty Jenkins for believing she could play the role. "There's only so much you can do, but if somebody doesn't give you a chance there is nothing you can do," Theron said. 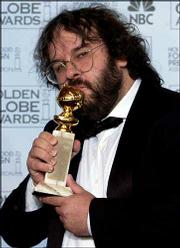 New Zealand director Peter Jackson accepts the award for best director for his work on "The Lord of the Rings: The Return of the King," at the 61st Annual Golden Globe Awards on Sunday in Beverly Hills, Calif.

The Hollywood Foreign Press Assn. event is regarded by many in Hollywood as one of the year's biggest parties, but it's also a way to generate front-runner buzz for the Oscars.

The Globes are distributed by a relatively small group, about 90 journalists who cover entertainment for foreign-based media outlets.

Robbins' supporting role as a grown child-abuse survivor suspected of murder in "Mystic River" earned him the first trophy of the evening. "Wow! We just sat down. The good thing about this coming early is that I get to drink now," Robbins joked.

Director Clint Eastwood accepted the drama actor award on behalf of Penn, who did not attend, and described his "Mystic River" star as an actor who has been too often taken for granted.

Anthony LaPaglia won best drama series actor for the CBS crime show "Without a Trace," while Frances Conroy claimed the drama actress award for the HBO show "Six Feet Under."

BBC America's "The Office," which stars co-creator Ricky Gervais as an annoying boss at a British paper merchant, defeated "Arrested Development," "Monk," "Sex and the City" and "Will & Grace" for best comedy show.

The critically lauded "The Office" is being developed into an American version.

The honorary Cecil B. DeMille Award went to Michael Douglas, whose actor father, Kirk Douglas, received the honor in 1968.

"My father couldn't make it here tonight, but if Kirk was here I would acknowledge him for his stamina, for his endurance and for his great sense of material," Douglas said.