Tale from the Back Room 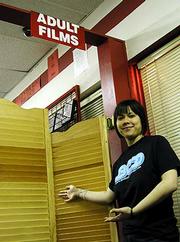 Case in point: Christina Mosier was working a Saturday night clerk shift at Miracle Video when a patron from a nearby tavern dropped by after a few jugs.

So what happens when a young woman becomes a cog in this male-dominated multi-billion dollar machine that continues to grind and grind and grind, again and again, faster and harder, year after year?

"This one's called 'Jurassic Pork'," she titters, recalling an early trip to 'the back room.'

In an industry where having sloppy intercourse in front of 30 people for distribution to hundreds of thousands more is the norm, "a little too far" is open to interpretation. 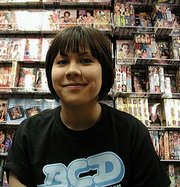 "There's a bondage section in the back. We have a midget shelf. But we don't really carry anything too specific. As surprising as it may seem, we do have boundaries as to what we'll get in."

So go elsewhere for your "Filthy Sanchez." Seek your "Donkey Punch" at another emporium. So far, it's not available at Miracle Video (19th and Haskell). But don't lose hope.

"I think that whatever sells is what we get in. We try to keep up with what's popular and what people are buying and watching."

"There definitely are things that I think should not be distributed. But then again, who am I to say what's gross or what's wrong? There are some things here that don't appeal to me, but it's just business. There have been a lot of legal battles as to what's obscenity and what's not, and what you can do and who decides it, so it's all very subjective, and I just want to say 'If you don't like it, you don't have to be around it.' There are definitely things that we have where I look at it and think, 'That's really disgusting. That's awful', and 'How can any woman subject herself to something like that?' And there's some stuff back there that I think is really great. I think that women aren't really as exposed to pornography as much as men, and so a lot of women just have the opinion of 'It's bad. It's wrong. It's disgusting. It's gross.' But when you're around it all the time, you see that there are definitely two sides to the story."

The effect of pornography on society has been a hot-button issue as long as there have been people who experience chronic rectal discomfort, and Mosier recognizes that there's room for debate. And that can even mean questioning the legality of the adult industry itself.

"You can pay a girl to have sex with somebody and it's illegal, but if there's a camera there it's not illegal because it's for the purpose of selling and distributing."

Ultimately, it comes down to comfort and curiosity.

"There's a lot of questions that come up working here. It's a private aspect of people's lives, and you're not a firsthand part of it, but you're the supplier. So you know what people like sexually, which is kind of awkward for complete strangers, so it's kind of like this intimate, but not really at all, relationship. It's and interesting place to work. I like it here."

"Everyone's doing it, but no one talks about it. So if we were just to break that barrier, then maybe everyone wouldn't have to feel so bad, and people would look me in the eye when I'm checking their videos out."