Review: Maximo vs. The Army of Zin - PS2

Maximo (of old school Nintendo Ghosts 'n Goblins fame) burst onto the PS2 scene almost two years ago, satiating the action fan's desire for a challenging and action-packed extravaganza. Okay, the challenge was more than just hard; it was straight-up hellish. Capcom returns with Maximo vs. the Army of Zin. And while there is still a challenge, you won't need to invest in another controller this time around, having smashed one to bits in sheer frustration. 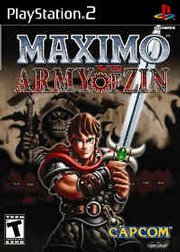 Maximo and his sidekick Grim (yeah, the Grim Reaper) are trying to figure out why there are no souls arriving in Hell lately. They soon realize this Army of Zin has been capturing and compressing the dead souls before they are set free to eternity. So Maximo and Death team up to rescue all of these souls from Zin's clutches.

As before, you start in a 3-D world down a set path with your sword and shield, jumping and double-jumping your way through several dark environments and villages drenched in evil robots. In this update you can use a vertical slash, horizontal slash and shield-throw button in various combinations to execute your foes in style whilst you converse with the locals to get extra coins, treasure, armor and hints to help you withstand the treachery. You may block attacks with the R2 button and when things get too hectic, which will happen, you can press the R1 button to summon Grim. Every hit Grim serves kills the enemy immediately. Of course, you must fill your Grim meter by engaging in much combat before you are able to use him for that short amount of time.

Your three main weapons, sword, hammer and Flame-Tongue sword, are all upgradeable along the way. Even though you only start with the normal sword, finding the other two isn't hard and comes up quickly. Once you have more than one weapon, you may simply press the L1 button to switch between them.

Many environments change sporadically. Hills and plateaus form out of nowhere, forcing you to change your path. This element is a series trademark and is a welcome addition to an action game, even though it's not used as much as the previous entry.

Army of Zin unfolds in a more linear fashion than its predecessor, making it easier to follow but less engaging. There are rewards for returning to a level to find all souls, treasures and secrets, but nothing truly compelling.

The boss battles are fun and won't make you reduce to trial and error to figure out how to take the boss down. Hints, some subtle, some blatant, are given usually on the body of the boss to guide your offense.

Unfortunately, Army of Zin isn't aesthetically pleasing. There are subtle improvements in the graphics engine that allow for sharper visuals, but the game still has a faded look to it. That coupled with cardboard cutout backgrounds, textures and uninspired set design (although tongue-in-cheek) make for a significant detraction.

The sound effects were on the right track only to be derailed by terrible compression. Ever listened to an mp3 at 48kbps versus the CD quality 128kbps? You may get the idea here. Luckily, you can make the wonderfully symphonic music louder than the inexcusable tinny sound effects to make the audio experience less callous.

Despite its technical shortcomings, there is immense entertainment value here, especially for a weekend rental. There is not much to separate itself from the previous entry, but the slightly modified formula still proves to have highly enjoyable moments.