"This is going to be a good night," proclaims Edwin Morales, in what could be the understatement of the year.

Outside, a line of 20-plus people is snaking its way to the entrance. The partygoers look to be an equal mix of hipsters, good ol' boys, gutter punks, preppies and just plain college kids.

It's 11:30 on Thursday night, and Neon is in full effect. Even with school out of session, nearly 400 people will pack The Bottleneck tonight, pushing the venue to the verge of capacity. Dancers from as far away as Kansas City and Manhattan will jam on everything from Tears for Fears to The Rapture, whipping themselves into a sweaty, booze-loosened pack.

The scene impresses Drana Moore, a 22-year-old college student from Boston. "In Boston, it's a total fucking fashion show," she says. "Here, it's unpretentious, laid-back and fun."

Top guns
Welcome to The Neck, Lawrence's newest music venue that's not really new at all. The 737 New Hampshire location is the same, but everything else is going to be different about Thursdays and Fridays at The Bottleneck. Gone will be the indie rock, metal, funk and jam bands that carried the club for nearly 20 years.

In their place: Neon Thursdays and Project Groove Fridays -- two nights dedicated to the fine art of partying hard-core.

The team responsible for the new-look 'Neck is Morales and Alison Olewnik, heads of Downplay Productions, a local production company that focuses on live hip-hop and electronica.

In two short years, Downplay developed two of the most popular nights in town -- Project Groove and Neon -- in two of the most unlikely venues. Every Friday, Project Groove transformed The Pool Room from a good-ol'-boys hangout to a hip-hop Mecca that hosted local artists like Approach and Mac Lethal and national acts like DJ Z-Trip and Eydea. On Thursdays, Neon attracted hordes of dancers to the recently closed La Tasca.

Megan Enbers (left) and Suzie Johannes revel in the fluorescent debaucherous glow of Neon, the '80s dance night every Thursday now at The Bottleneck.

"I'm a little sad about leaving the Pool Room because we got our start there," Morales says, adding that he had no choice but to relocate Neon after La Tasca owner Kelfel Aqui announced he would be closing the bar. "But that's a very short amount of time that I spend thinking about that because I'm really excited about what we have now ... We have so much to play with -- the ceiling is over 10 feet tall; there's an actual Green Room; we have a wonderful PA ... These are things we didn't have before."

Sixteen candles
To distinguish Downplay's nights at The Bottleneck, Morales and his team spend hours giving the room a makeover. For Neon, that means video projections and blacks lights; for Project Groove, the transformation requires candles, incense, tablecloths and colored light bulbs.

Morales has even made a concerted effort to refer to the club as 'The Neck' in all of his advertising.

"Maybe people will think that it's new management and it's not just the same old smoky rock club," Morales says. "The best compliment I got all night was, 'This doesn't feel like Lawrence, this feels like something in (Greenwich) Village.' That's awesome, 'cause we want to take people away a little bit." 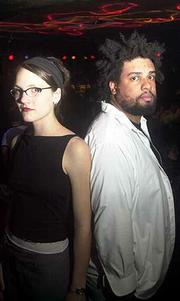 Alison Olewnick (left) and Edwin Morales, promoters who organized both Neon and Project Groove, the two new weekly dance nights and The Bottleneck.

Project Groove will also feature a marketplace of CDs, records, T-shirts, lip balm, handmade sweaters and other goods from local artists and musicians.

"We're trying to build a really strong community," Morales says. "(Hip-hop shows in this area) have always been like, 'Let's-get-you-in let's-get-you-out,' ... We're trying to create a place where people can build and not take it for granted."

Stand by me
Bottleneck owner Brett Mosiman says he wanted Neon and Project Groove in his club to help bring in consistent audiences. The club was renovated last year to include a larger dance floor and additional seating.

"We were looking to reconnect with the college crowd and get some established nights going again," he says. "We brought people in with advanced ticket sales, but as far as a hangout, we had ceased to be that."

Though having Thursday and Friday nights booked will cause The Bottleneck to lose a number of high-profile rock shows, Mosiman says it's a trade-off that keeps the club in business.

"If I lose a show, so be it," he says. "If you look around the country it's not working for a lot of clubs that do a straight calendar. You need those kind of anchor evenings."

Revenge of the nerds
Project Groove's two-year anniversary show Friday will mark a grand opening of sorts for 'The Neck.' (Project Groove officially kicked off Jan. 16 with the CD release party for Josh Powers' "SceneboosterSoundsystem" disc, and Neon has been active for 3 weeks.)

The show will feature performances from more than two dozen acts that have helped put Project Groove on the map, such as Approach, Archetype, Deep Thinkers, SoundsGood, Mac Lethal and Johnny Quest. Each will do a short set of 5-10 minutes, separated by performances from local DJs.

"It's gonna be a huge headache, but it's gonna be worth it," Morales says. "I have this image in my mind of how it should work, and if we execute it properly it will work."

Morales says The Bottleneck should allow him to draw larger national acts as well as local artists who didn't seem to fit in The Pool Room, such as 3 A.M. and BoChamp off the Lock-N-Load label.

"I really want to be able to establish Project Groove as THE hip-hop night in this area," Morales says. "Hopefully we'll have a really diverse crowd that will always support it."

Both Project Groove and Neon feature DJs who are dedicated to underground music. A typical Neon, for example, will include cuts from little-known groups like Black Eyes, Little Brother and Akrobatik in addition to big guns like Outkast and De La Soul.

"(In other clubs) you're going to hear what you see on MTV because that's what they cater to," Morales says. "We provide some of the underground and the local music and it's actually spun by DJs that are into it, so people realize, 'Oh shit, this could be a hit if it was a mainstream song.'"

Goonies
Neon's popularity has surprised even Morales, who started the night as a joke when La Tasca owner Kelfel Aqui asked him to come up with something to do on Sunday nights.

"I had just received an inheritance of '80s records from a friend who owned a club in Florida," Morales says. "Kelfel was like, 'If you can bring in people I'll pay you $100 and get you drunk.'"

Sundays quickly became the club's most popular night, prompting a spin-off night at the Westport Beach Club in Kansas City that its promoters (unconnected to Downplay) jokingly referred to as 'The Original '80s Night.' The promoters of that night even went so far as to copy Neon's unique approach to flyering: '80s movie posters altered to contain the faces of the DJs.

"I would sit (in La Tasca) and watch the owners of (other clubs in town) come and watch, and I could totally see what was on their minds," Morales says. "One thing that we have noticed is that there's all these amazing drink specials everywhere now on Thursdays."

Despite the success of Neon, Morales says it's still just a fun night to play the music he loves most and dance with his friends.

"We're not trying to impress anybody," he says. "Like, earlier I played the Fraggle Rock theme. I grew up on that, man."