Beverly Hills, Calif. — "The Lord of the Rings: The Return of the King," the final chapter in Peter Jackson's majestic fantasy trilogy, led the Academy Awards race Tuesday with 11 nominations, including best picture and director.

The Napoleonic era naval adventure "Master and Commander: The Far Side of the World" was right behind with 10 nominations, among them best picture and director.

Other best-picture nominees for the 76th annual Oscars included "Lost in Translation," about two lonely Americans in Tokyo; the brooding murder thriller "Mystic River"; and the horse-racing drama "Seabiscuit."

Along with best picture and director, the nominations for "Return of the King" included original score and song, visual effects, film editing and adapted screenplay for the script based on J.R.R. Tolkien's fantasy classic.

Nominees for lead actress included a surprise pick, Keisha Castle-Hughes as a New Zealand girl who bucks tradition to become leader of her Maori tribe in "Whale Rider." At 13, she's the youngest person ever to be nominated for lead actress, the Academy said. The film's distributor had been pushing her in the supporting category.

The youngest nominee ever was 8-year-old Justin Henry as supporting actor for 1979's "Kramer vs. Kramer." At 10, supporting-actress winner Tatum O'Neal was the youngest Oscar recipient.

Besides Jackson and "Master and Commander" director Peter Weir, the directing nominees included Sofia Coppola for "Lost in Translation," only the third woman ever nominated for best director and the first American woman. The previous nominees were Lina Wertmuller for 1976's "Seven Beauties" and Jane Campion for 1993's "The Piano." Both lost.

Coppola, the daughter of Francis Ford Coppola, also earned an original-screenplay nomination for "Lost in Translation."

The other directing nominees: Clint Eastwood for "Mystic River" and a surprise choice, Fernando Meirelles for the Brazilian film "City of God."

"Cold Mountain" did get seven nominations -- among them, best actor for Jude Law as a Confederate deserter making his way home to his sweetheart and supporting actress for Renee Zellweger for her role as a no-nonsense Confederate woman. 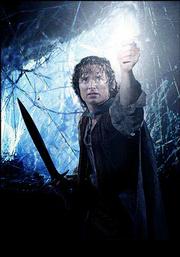 Actor Elijah Wood, as Frodo, is shown in a scene from New Line Cinema's "Lord of the Rings: The Return of the King." The final chapter in Peter Jackson's majestic fantasy trilogy led the Academy Awards race Tuesday with 11 nominations, including best picture and director.

Along with Law, the actor nominees were Johnny Depp in "Pirates of the Caribbean: The Curse of the Black Pearl"; Ben Kingsley in "House of Sand and Fog"; Bill Murray in "Lost in Translation"; and Sean Penn in "Mystic River."

The other best actress nominees: Diane Keaton in "Something's Gotta Give"; Charlize Theron in "Monster"; Samantha Morton in "In America"; and Naomi Watts in "21 Grams."

Contenders for supporting actor were Alec Baldwin in "The Cooler"; Benicio Del Toro in "21 Grams"; Djimon Hounsou in "In America"; Tim Robbins in "Mystic River"; and Ken Watanabe in "The Last Samurai."

Besides Zellweger, supporting actress nominees were Shohreh Aghdashloo in "House of Sand and Fog"; Patricia Clarkson in "Pieces of April"; Marcia Gay Harden in "Mystic River"; and Holly Hunter in "thirteen."

The blockbuster "Finding Nemo" was nominated for animated feature film, along with "Brother Bear" and the French film "The Triplets of Belleville."

ABC will broadcast the Oscars on Feb. 29 live from Hollywood's Kodak Theatre. Billy Crystal returns as host after a four-year absence.