Bonasera, left, portrayed by Frank Puglia, asks Don Vito Corleone, portrayed by Marlon Brando, for a favor in a scene from the 1972 movie "The Godfather." Brando, acclaimed as the greatest actor of his generation, died Thursday at age 80.

Los Angeles — Marlon Brando, who revolutionized American acting with his Method performances in "A Streetcar Named Desire" and "On the Waterfront" and went on to create the iconic character of Don Vito Corleone in "The Godfather," has died. He was 80.

Brando, whose unpredictable behavior made him equally fascinating off the screen, was acclaimed the greatest actor of his generation, a two-time Academy Award winner who influenced some of the best actors of the generation that followed, among them Al Pacino, Robert De Niro and Jack Nicholson.

"He influenced more young actors of my generation than any actor," longtime friend and "Godfather" co-star James Caan said Friday through his publicist. "Anyone who denies this never understood what it was all about."

Brando was the unforgettable embodiment of the brutish Stanley Kowalski of "A Streetcar Named Desire," the mixed up Terry Malloy of "On the Waterfront" (which won him his first Oscar) and the wily Corleone of "The Godfather."

But his private life may best be defined by a line from "The Wild One," in which Brando, playing a motorcycle gang leader, is asked what he's rebelling against.

"Whaddya got?" was his reply.

Marlon Brando plays in a scene with Rod Steiger, left, in this image from the 1954 movie "On the Waterfront." Brando, who revolutionized American acting with his Method performances and went on to create the iconic character of Don Vito Corleone in "The Godfather," died Friday. He was 80.

His image was a studio's nightmare. Millions of words were written about his weight, his many romances and three marriages, his tireless -- and, for some, tiresome -- support of the American Indian and other causes, his battles with film producers and directors, his refuge on a Tahitian isle.

His most famous act of rebellion was his refusal in 1973 to accept the best actor Oscar for "The Godfather." Instead, he sent a woman who called herself Sasheen Littlefeather to read a diatribe about Hollywood's treatment of Native Americans.

It was roundly booed.

Brando's private life turned tragic years later with his son's conviction for killing the boyfriend of his half sister, Cheyenne Brando, in 1990. Five years later, Cheyenne committed suicide, still depressed over the killing.

Still, the ceaseless spotlight never made him conform.

"I am myself," he once declared, "and if I have to hit my head against a brick wall to remain true to myself, I will do it."

Nothing could diminish his reputation as an actor of startling power and invention.

Starting with Kowalski in the stage version of "A Streetcar Named Desire" and a startling series of screen portrayals, Brando changed the nature of American acting.

He was schooled at the Actors Studio in New York, learning Method acting in which the performers closely identify with the role of the character they portray. He created a naturalism that was sometimes derided for its mumbling, grungy attitudes. But audiences were electrified, and a new generation of actors adopted his style. 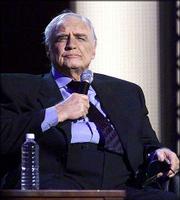 Marlon Brando Jr. came from the American heartland, born in Omaha, Neb., on April 3, 1924. His father was a distant, conservative man of French, English and Irish stock; the original family name was Brandeau.

His mother, the former Dorothy Pennebaker, was small, willowy, compassionate and filled with creative energy.

Young Marlon became exposed to the theater through his mother, a leader and occasional actress in the Omaha Community Playhouse. When a leading man dropped out of a play, she pleaded with a young neighbor just home from college to take the role. Henry Fonda reluctantly agreed.

The lives of Dorothy Brando and her children were upset when the father was transferred to Evanston, Ill., when Marlon was 6. The family later moved to Santa Ana, Calif., and finally to Libertyville, Ill. 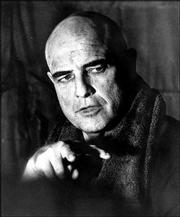 Young Marlon was constantly being reprimanded for misbehavior at school, infuriating his father. Exasperated, his father sent the boy to military school in an effort to instill discipline. He was expelled. Unable to join the war because of 4-F status, Brando at 19 moved to New York and stayed with his sister Frances, an art student.

Jocelyn Brando studied acting with Stella Adler, and Marlon decided to join her. It changed his life. After a week with the young man, Adler declared: "Within a year, Marlon Brando will be the best young actor in the American theater."

It took longer. He appeared in such plays as "I Remember Mama," "A Flag is Born" (a Jewish pageant with Paul Muni) and "Truckline Cafe." The latter was directed by Elia Kazan, who would remember him for "A Streetcar Named Desire" in 1947.

The Tennessee Williams play made Brando famous, and his first signs of discomfort emerged. The press made much of his motorcycle, leather jackets and T-shirts, his bongo drum playing. He hated the clamor of fans and suffered through interviews.

The image of Stanley seemed to have fallen on Brando, and he once protested to an interviewer: "Kowalski was always right, and never afraid. He never wondered, he never doubted. His ego was very secure. And he had the kind of brutal aggressiveness that I hate. I'm afraid of it. I detest the character."

Brando suffered through the tedium of his two-year contract with "Streetcar," and he never appeared in another play. For his first film he declined several big studio offers and joined independent Stanley Kramer for "The Men" in 1950. To research the story of paraplegic war veterans, he spent a month in a Veterans Administration hospital.

His impact on screen acting was demonstrated by Academy nominations as best actor in four successive years: as Kowalski in "A Streetcar Named Desire" (1951); as the Mexican revolutionary in "Viva Zapata!" (1952); as Marc Anthony in "Julius Caesar" (1953); and as Terry Malloy in "On the Waterfront" (1954). 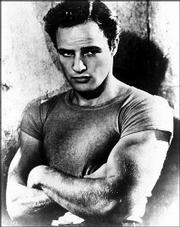 Although he remained in Hollywood, he refused to be part of it.

"Hollywood is ruled by fear and love of money," he told a reporter. "But it can't rule me because I'm not afraid of anything and I don't love money."

His films after "Waterfront" failed to challenge his unique talent. Most were commercial enterprises: "Desiree," "Guys and Dolls," "The Teahouse of the August Moon," "Sayonara," "The Young Lions." He tried directing himself in a Western, "One-eyed Jacks," going wildly over budget.

A remake of "Mutiny on the Bounty" in 1962, with Brando as Fletcher Christian, seemed to bolster his reputation as a difficult star. He was blamed for a change in directors and a runaway budget though he disclaimed responsibility for either.

The "Bounty" experience affected Brando's life in a profound way: He fell in love with Tahiti and its people. Tahitian beauty Tarita who appeared in the film became his third wife and mother of two of his children. He bought an island, Tetiaroa, which he intended to make part environmental laboratory and part resort.

Although he remained a leading star, Brando's career waned in the '60s with a series of failures. He was impressive, however, in several movies, among them the comedy "Bedtime Story" and the John Huston drama "Reflections in a Golden Eye."

His box office power seemed finished until Francis Ford Coppola chose him to play Mafia leader Corleone in "The Godfather" in 1972. The film was an overwhelming critical and commercial success and Brando's jowly, raspy-voiced Don became one of the screen's most unforgettable characters.

"I don't think the film is about the Mafia at all," Brando told Newsweek. "I think it is about the corporate mind. In a way, the Mafia is the best example of capitalists we have."

In his memoir, "Songs My Mother Taught Me," Brando wrote of being emotionally drained by "Last Tango," an improvised film that included several autobiographical speeches.

Most of his later films were undistinguished. One hundred pounds heavier, he hired himself out at huge salaries for such commercial enterprises as "Superman" and "Christopher Columbus: The Discovery."

He was more effective as the insane army officer in Coppola's "Apocalypse Now" and parodying his "Godfather" role in the hit comedy "The Freshman."