The best golf game ever?

Summer months are slow for gamers. It's the time when few hot titles hit the shelves and you catch up on the games you haven't beat yet. Sometimes, however, we find sweet water in this desert. 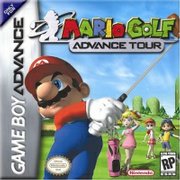 Mario Golf, one of the wildly popular red-plumber spin-offs, has always enjoyed a steady following. Most gamers assumed that the GBA version would be a dumbed-down version of its Gamecube counterpart. Man, were we wrong.

It seems that Nintendo delights in innovation so much that it took a simple concept like Mario Golf and turned it into a role-playing game. You heard right, an RPG. Sure you hit the courses to compete or hone your skills like in regular golf games, but there is a story to guide your progress. Actually, it makes more sense when you think about gaining "experience" in an RPG. In modern golf video games, you acquire similar experience points to buy better clubs and equipment, thus raising your experience level. With 14 characters to choose from, you stay connected with your golfing community while traversing the six full courses.

The mechanics are similar to its Gamecube counterpart, brilliantly adapted to the Game Boy Advance's fewer buttons. When golfing, you are immersed in a faked 3-D environment and have all the control over your shot that you would expect. Even the physics are accurate. The courses are all well-designed and if you are good enough, you can unlock the crazy "Star" versions of each course.

Not only is there the single player experience likened to a Golden Sun RPG, but with multiplayer modes, tournaments, Gamecube connectivity for extra characters and wireless connectivity, this is the most solid golf package handhelds have ever seen.

The music and sound effects are all top-notch for GBA's capabilities. The music really holds its own, but I have to question the style choice. It doesn't fit. Still, it's Nintendo. You embrace the style choice or ignore it. It won't get in the way of how great an experience Advance Tour is.

Mario Golf: Advance Tour can be a bit on the short side for the single player experience, but the life of the game is almost infinitely extended by its fun factor, multiplayer options and connectivity. Don't let the RPG elements scare you; Advance Tour is the best golf game available on a handheld.