The eagerly-awaited "GTA-killer" finally hits the shelves. And what a thud it makes.

People like to hate games for no reason. The Grand Theft Auto series is so popular, there is an anti-fan club not even based of the quality of the gameplay. In this club, you will find die-hard Driver fans. Driver, a free-form action series sort-of like Grand Theft Auto but focused more on vehicular combat, finally puts forth the fan-dubbed "GTA-killer" in Driver 3. 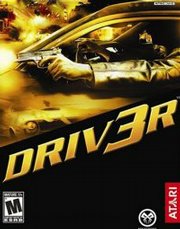 It's nothing of the sort. Driver 3 is plagued with so many problems it's hard to know where to begin.

Most of your missions revolve around car chases, a Driver staple. The title has a healthy list of vehicles for you to drive and crash and create Bronson-esque mayhem. The destructible vehicles are fairly fun to see get obliterated into various pieces. Still, this staple is the game's cornerstone and is its only saving grace. Unfortunately, that grace is still ridden with paralyzed movement and control. The analog sticks are slow to respond and getting the handle of different types of vehicles shouldn't be as difficult as it is.

Many catch-up missions will make you restart if you get too far behind. Most of the time this is due to the crippled level design. Not to mention you have to play guessing games with what the physics engine is going to do to your vehicle. It can be pretty maddening. And that's the good part.

The controls get even worse when you are on foot which, thankfully, isn't most of the game. You will collide with invisible walls, not collide with ones that are visible and get stuck in incomprehensible places. It takes many tries to even get into a vehicle. Pressing the action button proves action-less 50% of the time. All of this frustration is unnecessary. It's as if there was no internal beta testing for the game.

If Driver fans want to really do GTA comparisons, I am sorry, there are none. The "freedom" afforded by said competitor is 50 fold over Driver 3. There are side-mission choices to make, but the freedom is faked. Not only that, but when every enemy you encounter is as intelligent as an old Duke Nukem arcade shooter enemy, you can't get immersed in the experience whatsoever.

There is much to be applauded for the presentation, though. Ving Rhames and Michelle Rodriguez lend their vocal acting abilities to the cliche story, bringing up the cinematic feel up a few notches. The graphics sport nice car, character models and particle effects, but the collision detection and invisible scenery are quite disappointing.

Driver fans, this is not the sequel you wanted. GTA fans, you still have no competition in your genre. It's utterly confusing how many small things can go wrong in a game from a studio so inspired by its own creation.