It's an original experience that should prove fun for anyone.

In the latest version of old games magically renewed, The Legend of Zelda: Four Swords Adventures hits the Gamecube meshing the goodness of multiplayer gaming and Zelda. 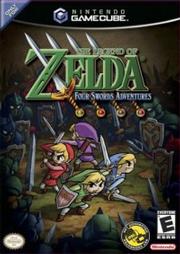 If you haven't played anything in the Zelda series, most likely you aren't a real gamer or were just born. Like the Mario name, the Zelda brand moved out of its niche with the first excellent Four Swords game for the Game Boy Advance. Combining teamwork and brilliant puzzles, Nintendo successfully made Zelda a fun four-player experience.

Here on the Gamecube, Four Swords Adventures takes on the look of the classic A Link to the Past. Only this time there is no over world or intertwining sections. The look remains the same as its Super Nintendo inspiration but each of the 24 levels is their own entity. You can't take items to the next level. Every section is a contained burst of action and intelligent puzzles.

You, as Link with the "Four Sword," are multiplied into four Links. While playing alone you can command formations toward the other three to help push and solve big and complex obstacles. Of course, this is not how the game is meant to be played. You and three friends must get together to enjoy it to its fullest extent. By connecting your Game Boy Advance and using it to control your character, you can keep text and other images off the TV screen as to not interrupt the main multiplayer action. Even if you happen to be off screen on the TV, your view will automatically switch to the GBA, keeping the main action of the other three on the big screen.

It all works with polished fluidity and working together as a team with your friends couldn't be livelier. Learning to communicate effectively while figuring out puzzles and battling the classic Zelda baddies is almost heaven. Not only that, but figuring out how to solve some of the Light World/Dark World puzzles can be particularly challenging, as some of your friends must be in a different world than you.

It will take you awhile to get through the main adventure, but when that's over, there is a battle mode to boot. Shadow Battle is like a 2-D Deathmatch employing most Zelda items like bombs, swords and switches to fell your opponent. It's surprisingly fun.

The graphics are, well, very dated even though there is much more action on screen than what the old SNES could handle. Even though textures and particle effects are spruced up a bit, it's not technically impressive. Novel, but not new.

The sound is fine and crisp but the music is annoyingly antiquated. Don't get me wrong the actual melodies are creative and ingenious, but the 1976 eight-key Casio sound got old in the 90's. It's like giving Bach a Playskool Pee-Wee piano to play his greatest.

I still yearn for new franchises to come out of the big N, but it's hard to argue with their milking of old franchises when this type of quality is produced. I fear that the multiplayer element might be to intimidating for some but I pray that you make yourself check it out. It's an original experience that should prove fun for anyone.