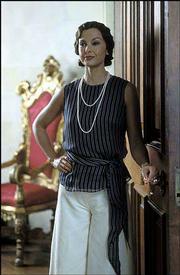 Beverly Hills, Calif. — Ashley Judd has so firmly entrenched herself in Hollywood that it's hard to remember less than a decade ago she was best known for being the one in the family who DIDN'T sing.

By the time the Kentucky-raised actress had made her first film, her older sister, Wynonna, and mother, Naomi, had turned The Judds into a multiplatinum country act.

But things have come full-circle. Now the star is flexing her vocal chops in "De-Lovely," which opens today in Kansas City. The musical biopic centers on the relationship between celebrated songwriter Cole Porter (Kevin Kline) and his wife Linda Porter (Judd).

And she gets to sing about it.

"I didn't have a problem with the idea of doing it," Judd says. "I have a healthy enough ego to think I have a reasonable, if not outright pleasant, voice. However, when it came time to sing I had a real crisis of confidence."

In the movie, Judd shares romantic duets with Kline on the Porter classics "In the Still of the Night" and "True Love."

"The good news is the songs are really quiet, cozy, domestic, intimate-type songs," she says, interviewed at a Los Angeles press roundtable in June. "They're not big performance numbers a la Alanis Morissette singing 'Let's Do It (Let's Fall in Love).'"

The 36-year-old performer claims to not be completely pleased with how she sounded in the film. She says her husband, Scottish race car driver Dario Franchitti, even complained that the soundtrack didn't fully do her justice.

"He said, 'You have to go back in and redo that. That's not as good as you sing,'" she recalls. "But it is what it is and it's out there. You just accept it for what it is and not have Robbie Williams-type expectations."

Judd already flirts with audience expectations in "De-Lovely." It's a refreshing change from the serial killer/murderous husband roles ("Twisted," "High Crimes," "Double Jeopardy") that have typified her later career.

While a period musical may seem like a stretch for the actress, it was the character of Linda that she instantly connected with.

"I had a very natural affinity with the idea of being close to someone who has a really special talent," she explains. "I grew up at the knee of greatness -- that's my sister. I married someone who has a very elite and rare gift ... The idea of Linda being with Cole and being a high-class enabler for his creativity was something I responded to."

The twist to the Porter saga is that despite being married to Linda for decades, Cole lived a secretly gay lifestyle.

"Cole would never have been able to live an openly homosexual life during his era, because it was a felony," she says. "And in fact, when Linda briefly left Cole it was because she felt like she couldn't continue to subsidize behavior that put him at really grave risk -- much like being with someone who drinks.

"I think that these two people who were married for 35 years -- which does not happen by accident -- had a very nurturing, sustaining and very profound relationship that simply did not have sex as its cornerstone. I know that it's really hard for people to believe in this sex-crazed pop culture moment when it is so grossly over-emphasized."

What Judd found additionally intriguing about Linda was that, despite being considered the "most beautiful woman in Europe of her day," she was also originally from Kentucky.

"I get very possessive of all that stuff," she says of safeguarding her Bluegrass State roots from other actresses. "I'm like, 'She is so not going to play that role. She's from NEW YORK!'"

Although Judd currently lives in a Scottish castle, she does constantly return to her native state -- often to keep up her reputation as the University of Kentucky's most high-profile basketball fan. In fact, she was visiting the week of the "De-Lovely" interviews so she and Franchitti decided to drive rather than fly the 1,700 miles to Los Angeles.

So does Franchitti speed?

"It's amazing how people think that because he's a race car driver that it's going to be flamboyant and with disregard for the basic rules of the road," she replies. "He's an extremely conscientious and very careful driver."

The trek also took the pair straight through Kansas.

She adds, "I met a couple of Kansas basketball players -- I don't remember their names -- but I was playing blackjack in Las Vegas and they were sitting at my table. They were from the '96-'98 squads, because they played against Tony Delk and Walter McCarty. That was a good team. How come they didn't win the title?"