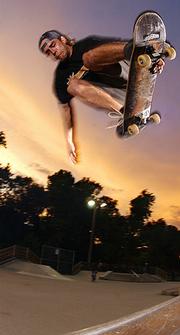 Lawrence skateboarder Justin Shiney grabs on the halfpipe at the Lawrence Skatepark near 9th and Rockledge Streets.

There are some who may say Kansas skaters were doomed from the start.

As evidence: the first major effort to organize a skate park in Lawrence - a cooperative in Burcham Park - came to an abrupt end when temporary stages from the '97 Vans Warped Tour displaced it.

"They basically threw the skate park in the river," recalled local skateboarder and BMX rider Joe Montgomery. "One of my friends was working at the dam and he calls me and says, 'Hey Joe, I got two ramps down here that are just floating in the reservoir.'"

Stuck between a half-pipe and a hard place, Lawrence skaters united to convince city government to spend $125,000 on a concrete skate facility in Centennial Park. The 12,306-square-foot park - built in 1998 as a collaborative effort between skaters and park staff - quickly earned a reputation as one of the premier street-skating courses in the Midwest, attracting a steady stream of local and out-of-town skaters, bikers and rollerbladers.

Five years later, the skate park is still popular, but there is dissention among the ranks. Many skaters find the park too crowded or no longer challenging. While Lawrence has idled, the rest of the country's skate-park IQ had advanced in leaps and bounds. Colorado has become a Midwest Mecca of cutting-edge skate parks. Kansas City, Columbia and even Topeka now boast parks widely regarded as superior to Lawrence's.

To put it in skate lingo - the rippers better be equipped to travel.

"As years go by people progress," Montgomery explained. "They need bigger stuff to do things on or they hit their apex."

Skating uphill
So, five years after their biggest victory yet, Lawrence skaters are organizing once again. This time, the goal is to build a $50,000-plus "bowl" from smooth concrete to be placed adjacent to the existing park. The yet-to-be-designed contraption would bring Lawrence up to par with top skating destinations in Colorado or California. Presumably, it would also attract pro skaters from across the country and even from other countries.

But for the all the talk, the bowl is still very much a pipe dream. Skaters have proved to be poor organizers. And efforts to get the city to pay for park improvements have stalled, partly because the Parks and Recreation department recently dropped a heap of money on ramps at Deerfield Elementary School.

"It's not on our list of projects to put a lot of money into," said Fred DeVictor, director of the Department of Parks and Recreation. "If they're willing to raise the money toward it that would make it happen sooner than relying on city tax dollars."

A panorama of the skate park in Omaha, Neb., which features a 'snakerun' that dumps into two bowls. (Click photo for a panorama)

For Lawrence resident Oliver Hall, who is helping organize Friday's "This Is Needed" skate park benefit, the upgrades are very necessary.

"You know how cities are - they'll start a project and get something going and then they'll kind of abandon it and it falls apart," said Hall, whose 12-year-old son Alex frequents the skate park. "We can't just let kids run loose - we need to keep providing a place for them."

Hall's photographs will be part of a benefit art sale Friday evening at the Bottleneck. The show will be preceded by a barbeque and "best trick" competition at the skate park and followed by a concert at The Bottleneck (scheduled performers include Al Japro, Unknown Stuntman, Rain Closet, E.M.C. and Nezbeat).

"We're really trying to show the city that this culture is something to take seriously," said organizer Edwin Morales.

Going bowling
The effort's lynchpin may turn out to be Joel Smith, a Lawrence-based skate ramp builder by trade who has been lobbying city commissioners and Parks & Rec for funding assistance.

Smith, 30, spends about half the year traveling around the country building skate parks for a California-based company. He believes Lawrence's park is outdated.

"I hate to rag on the city - I appreciate the fact that they even built a park. But there are other cities where it's just amazing," he said. "Pros would show up at our park and some wouldn't even ride, they'd just laugh."

Smith is spearheading the effort to solicit corporate sponsorship for the park addition. He envisions tiles with names of local businesses imbedded in the park or even a bowl shaped like the logo of a big corporation.

"We're going to try to go after the people that have money," he said, adding that a second objective was to earn non-profit status.

To build a basic bowl would cost at least $50,000, Smith said, but $75,000 could build a more sophisticated snaking trench. Either option would present a safer, smoother skating option for all levels of skaters, he said. 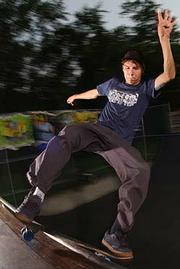 "The park we have now is more street skating - it's fairly rough on you," he said. "With the new stuff you can fall all day long and you're not going to get chewed up because it's so smooth ... when you're 50 you could still ride it."

Smith's biggest challenge may be convincing city officials and donors that a bowl could appeal to skaters of all talent levels.

"People think that if it's deep it's only for experts, but a kid can still get in the bottom and skate just as well," he said.

"Definitely there'll be people in this town that used to skate five years ago that will probably dig out their skateboard to come ride."

Speed skate
Ironically, the effort to improve the Lawrence Skate Park began at the same time the city was investing $30,000 into building a second skate park at Deerfield Elementary School.

Since then, the Deerfield park has attracted crowds of younger skaters but drawn criticism from more advanced skaters who feel the money was ill-spent. 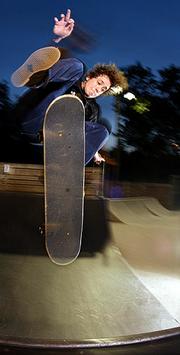 J.P. Redmon kick-flips on the halfpipe at Lawrence skate park.

"They didn't ask anybody about it - they just bought all this crap," said Justin Shiney, who skates for Let It Ride skate shop at 15 E. 7th St. "Really the ramps that they bought are just horrible, hazardous things. I wouldn't even want kids to skate on them."

Shiney and Smith both lament what they perceive as a gap between the city officials designing and building local skating facilities and the skaters who use them.

"It seems like they don't do a lot of the research that is required," Smith said. "You can have good design and a bad builder and (the park) can be an 'F.'"

DeVictor said the design for the Deerfield park was kept in-house because the city wanted to experiment with different products. He added that the park was geared towards beginners, not older skaters.

The city is also entertaining the possibility of building a third skate park at Clinton Lake, DeVictor said, but no timetable has been set for its development.

Good, clean fun
Though more advanced skaters may tire of the Centennial skate park, it is still immensely popular with younger skaters and their parents.

"It's usually a pretty clean environment ... you don't see any kids drinking or smoking dope or whatever," said Grant Stewart, who takes his 7-year-old son Duke to the park nearly every day. "I think it's a great way to keep kids out of trouble." 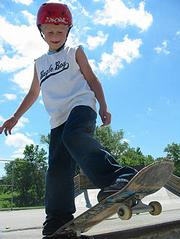 For skaters like Stephanie Pugh, 24, the park offers the thrill of street skating without the hassle of tickets and law enforcement.

"Without the parks there'd be no place to skate," Pugh said. "They aren't messing around with the tickets - if you hit Wescoe (Hall) there's a pretty good chance you're going to get a ticket."

The younger generation frequently mixes with the old at the park, which typically fills up in the evenings with diverse ages and talent levels.

"I still ride it - I still have fun there, just because it's what we have," Montgomery said. "I can bitch about it but at least we have something."