San Jose, Calif. — A California man has claimed top honors at the annual Bulwer-Lytton Fiction Contest celebrating bad writing, likening the end of a love affair to "Martha Stewart ripping the sand vein out of a shrimp's tail."

Dave Zobel, 42, a Manhattan Beach software development director and author of "Dave Zobel's Bent Book of Boatspeak: How to Sound Like a Sailor and Know Just Enough to Be Dangerous," bested thousands of metaphor-mangling, simile-slaying writers from Hong Kong to Bolivia with this submission: 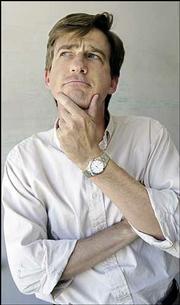 Dave Zobel, 42, is the winner of this year's Bulwer-Lytton Fiction Contest for bad writing. Zobel won $250 for his entry.

"She resolved to end the love affair with Ramon tonight ... summarily, like Martha Stewart ripping the sand vein out of a shrimp's tail ... though the term 'love affair' now struck her as a ridiculous euphemism ... not unlike 'sand vein,' which is after all an intestine, not a vein ... and that tarry substance inside certainly isn't sand ... and that brought her back to Ramon."

The contest is named after the British novelist Edward George Bulwer-Lytton, whose 1830 novel "Paul Clifford" begins with the now infamous phrase, "It was a dark and stormy night."

Runner-up was Pamela Patchet Hamilton, of Beaconsfield, Quebec, who described her style as "Dave Barry with a feminist twist." Patchet, who has written humor essays for The (Montreal) Gazette and other newspapers, impressed judges with this putrid passage:

"The notion that they would no longer be a couple dashed Helen's hopes and scrambled her thoughts not unlike the time her sleeve caught the edge of the open egg carton and the contents hit the floor like fragile things hitting cold tiles, more pitiable because they were the expensive organic brown eggs from free-range chickens, and one of them clearly had double yolks entwined in one sac just the way Helen and Richard used to be," she wrote.

The contest is a labor of love for Scott Rice, an English professor at San Jose State who started the contest in 1982. Rice reads thousands of entries, submitting what he feels are the best to a panel of 15 people, many of them fellow professors or former contest winners.

Rice said this year's entries were unusually witty. "Sometimes the entrants are more clever than the judges," he said. "Those people generally lose."