A fantastic trip down memory lane. These memories are of great gameplay. 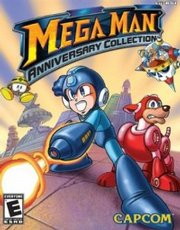 Mega Man returns to the little screen in this collection of all the original games plus two arcade games. Do these classics stand the test of time, or has the fun all been worn off?

There are few legendary series that have captivated audiences for decades. Games that have become the exemplification of the genres they helped create. Back in 1987, Mega Man was released with the idea that you could choose what order you tackle your opponents in. What made the game, and its countless sequels, was its tried and true gameplay. Some of the tightest gameplay ever, even compared to today's standards. This collection has all of the original series Mega Man games, as well as the two arcade games. Not only that, but there are all sorts of hidden goodies for those of you hardcore enough to find them.

Mega Man is almost old enough to vote, and you can definitely tell see his age. But, just because you notice his age, doesn't mean you mind it. None of the graphics have been touched up at all since their initial debut, so don't expect anything too flashy. That said, the graphics were great in their time, and they have really held up to the test of time.

If you are looking for a mind-blowing 3D polygon fest, than you are looking in the wrong direction. Mega Man won't win any beauty pageants, but it definitely has its style. And, once the games get into the higher levels (especially Mega Man 8 and The Power Battles) it really does start to look great.

Mega Man has always been extremely strong in the music department. One visit to ocremix.org can easily tell you how many times these songs have been remixed. One of the greatest additions to this collection is the remixed tracks that play in some of the levels (PS2 version only.) The music fits in great, and really makes the game a lot more enjoyable.

Sound effects are unique to say the least. I always thought a frog was talking to me when Mega Man landed. The sound effects haven't changed since Mega Man's inception, and let's just say they are "hardcore."

This is where this game really shines. Ingenious level design mixed with some of the tightest control in a video game end up with some all star gameplay. All of this stuff is classic folks, and well deserving.. Ok, so maybe Mega Man 6 isn't classic...but the rest are. The gameplay is near perfect, hell it is perfect in some places.

Mega Man's tight gameplay, catchy tunes, and well aged graphics add up to one fun experience. If you are the type of gamer that values gameplay above all else, than the fun factor will be out of this world. If, on the other hand, you are more into the technical aspects than you will be sorely disappointed... I also suggest you go watch a movie instead of playing a game. There are a few frustrating moments that drop the fun down.

Honestly, I could play these games over and over and over again. There are a buttload of games, plus great arcade games that will keep you coming back.

Oddly enough I've had more fun with this package than almost any other game released this generation. I don't know if that is a blow to this gen. or if it is just an example of how glorious this game is. It is old school fun, with some new twists, and I love it. I think it is a must buy if you own a PS2 or GCN.

This game is one solid package that every old school gamer should have. All of the pre-X series Mega Mans, plus two arcade games thrown in for thirty dollars; it is ridiculous how much value you get with this package. That said, you need to be an old-schooler or gameplay freak to get the full enjoyment of the game. If you are looking for a lot of great games that have aged well, than this is your game.

There are a few differences between the two versions that you should be aware of. The biggest difference is the unlockable extras; with the Gamecube you get a great interview with series creator Kenji Inafune. With the PS2 version you get an episode of the Mega Man cartoon they used to run. Personally, I hated that fucking cartoon because they made Breakman/Protoman evil when he is not. Play through these games, and you will find that he is a good guy. The series creators should have done that too. Beyond that, the Ps2 version has remixed versions of a lot of the music. I've listened to every Mega Man remix on the internet, and these are some of the best I've heard. Very nice. The Gamecube was supposed to have these to, but according to Capcom they couldn't fit 'em on the disc. The only time you can hear them is on the interview. It makes me sad. The worst thing about the Gamecube version, though, is that they reversed the controls from how they were on the NES. Shoot is where jump is and vice versa. You know how many times I fell into a pit and screamed so loud that my friends could hear it in Newark?

The Gamecube does have the better unlockables, but when all is said and done, the PS2 version is better, and if you have both systems I recommend getting that version. I actually took my GCN copy back to get a PS2 one. The Nintendo owners really got shafted on this one.