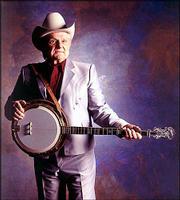 Ralph Stanley and the Clinch Mountain Boys will perform their "old-time mountain music" in Lawrence today.

In the music world, there's a difference between being "famous" and "legendary."

Perhaps one benchmark to residing in the latter class is if there's a museum dedicated to you.

"They're working on it right now," the vocalist says of the Ralph Stanley Museum and Traditional Mountain Music Center, which will open Oct. 15 in Clintwood, Va. "About all of the awards -- which is three or four big rooms full -- is going to be there. And a load of things like clothes and instruments. It's going to be a dandy."

He adds, "I'm real thankful for that, because there's not too many artists that live to see all that. I've not lived to see ALL of it yet, but I hope I'm still around in October."

The Virginia native is generally regarded as the most important figure in bluegrass music today. While lifelong purists of the style have known about the singing banjo player since the 1940s, a new legion of fans has flocked to him in recent years.

Stanley was a key figure in the multiplatinum-selling soundtrack to the movie "O Brother, Where Art Thou?" His tune "O Death" enjoyed a prominent part on-screen -- even if it was lip-synched by a Klansman in the comedy. But it was "Man of Constant Sorrow," which he and his brother Carter introduced to the mainstream in the 1950s, that became the film's signature track.

The success of the movie/album resulted in a resurgence for Stanley, who captured his first-ever Grammy in 2002 at the age of 75. Most impressively, it was for Best Country Male Vocalist Performance, where he bested Johnny Cash, Willie Nelson, Lyle Lovett and Tim McGraw.

"I was mighty proud of that," he says. "I can't think of too many more (career honors) that I need to do. If there is any, I'd like to get them. But I can't think of one right now."

The patriarch of what Stanley calls "old-time mountain music" still plays in the neighborhood of 150 shows a year. And he is back on the road again, making tour stops in Wyoming and Nebraska before heading to Lawrence, where he and the Clinch Mountain Boys will perform tonight at Liberty Hall, 642 Mass.

"We've got a show that's suitable for old people, for young people, for little children," he says. "We have a clean, sober show. We sing gospel songs. We do love songs. And we do instrumentals. We can suit anybody that wants to come."

Although his touring schedule hasn't waned, he has backed off displaying the three-finger picking style that makes his banjo work so distinctive.

"I've got a banjo player (Steve Sparkman) that's been with me for about 10 years," he explains. "You can't tell him from me if you're not looking at him. But I always get a request to pick a tune or two myself, which I do."

So does the veteran's picking still hold up?

Stanley is even better known for his matchless singing voice. It's a musical force ripe with contradictions: raspy yet powerful; ancient yet utterly modern.

"It's just an old-time, natural, God's gift that I have that the Lord gave me," he says. "That's the way I like to describe it."

In addition to his "O Death" Grammy (he also won an additional award a year later for Best Bluegrass Album), Stanley has been racking up even more career honors.

A few months ago, he was named "Virginian of the Year" by the Virginia Press Assn. Nationally, he received a Library of Congress "Living Legend" Medal in 2000.

Yet one of his more unusual accolades came in the form of food.

Appalachian Legacy Heritage Foods and Gifts has developed a line of products endorsed by Stanley. These items are handmade versions of recipes created by mountain settlers in southwest Virginia. The label features an image of him at the microphone with banjo in hand.

Once the current tour winds down, the 77-year-old performer will return home and prepare for the inauguration of his museum. Among the most cherished objects to be exhibited will be the first banjo and first guitar that he and his brother Carter (who died in 1966) ever played on the radio.

"It was an old yellow-neck Gibson," he says. "I sold that years ago ... Rickey Skaggs' banjo player, Jim Mills, found it and bought it. He's going to bring it to me to put in the museum."

It will be one more small but mighty piece to represent the ongoing legacy of the legendary Stanley.