Giant killer robots, Spider-Man's guide to New York City and Keanu Reeves as a man who literally has been to hell and back were some of the big attractions Friday at the 35th annual gathering.

Reeves, who's black-cloaked "Matrix" character is a favorite costume choice of some attendees, was there to promote his latest role in a comic book adaptation titled "Constantine."

He said this was his second time at the event, and offered up a "whoa" of sorts in praise of its geeky chic.

But there's no better place to get a sneak peek at the latest from the worlds of sci-fi, fantasy and superheroes. Comic-Con is open to the public and runs through today.

Hollywood movie studios began invading the convention in recent years, seeing it as a chance to not only promote upcoming movies but also to test the reactions of fickle fans.

"Comic-Con has become THE place to initially mount a campaign, whether it's a comic book announcement, a video game or a genre film," said David Goyer, the screenwriter of the upcoming "Batman Begins," and writer-director of "Blade: Trinity," the third in the vampire-hunter saga.

David Dorantes, 3, and his father, Mondo Dorantes, both of Lemon Grove, Calif., relax while sitting on the floor next to a banner of Superman, while attending Comic-Con International in San Diego.

Goyer touted "Batman Begins" along with actor Cillian Murphy, who plays the villain Scarecrow, at a panel discussion attended by more than 6,000 people Friday afternoon.

"I think had we not had a presence here it would have been a glaring omission," Goyer told a reporter. "First and foremost, everyone would have said, 'Are they trying to hide something?"'

As it turns out, they did; one of the first questions fans asked Murphy was, what does Scarecrow look like? The filmmakers had banned him from answering that one.

From the world of paper comic books, the industry leaders Marvel and DC were both present to show off their latest tales of Superman, Daredevil, Batman, and of course Spider-Man.

Some of the presentations ranged from the insightful -- like the analytical "Super Man on the couch" session that explored the psyche of the Man of Steel -- to the somewhat silly, like the "Marvel Super Heroes' Guide to New York City," in which legendary comics scribe Stan Lee and assorted other Marvel editors talked about how the Big Apple influenced their storytelling over the years. 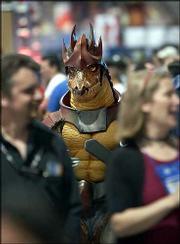 Many of the attendees (there were 75,000 last year) say the big draw of Comic-Con is not the celebrities but the costumes.

Lara Carver, 34, a school nurse from Las Vegas, showed up at the event dressed as Wonder Woman in a red cape and a red, white and blue bustier outfit.

"I was really nervous yesterday and I kept having panic attacks, but it's not so bad now, because everyone is like 'Ooh, Wonder Woman!"' she said.

"We didn't even leave the hotel and people were already snapping pictures," he said.

Aldo Cos, 43, a school teacher from Los Angeles, was a lone "Star Trek" officer among a group of Klingon friends dressed in body armor and rubber, ripply foreheads.

"He's our token Federation human," said Joan Jones, 39, one of the Klingons.

Another of their friends, Jacquie Vorhies, was dressed only as herself in a T-shirt and shorts. But she too had a role to play.

"I'm the human captive of the lumpheads," she said, using a presumably racist Klingon slur. "I assist as ordered."

After she said that, her friend Dennis Hanson, 48, who was costumed as a Klingon admiral, told her he was hot in his costume and ordered her to fan him.